So the idea of giving shape to metal sounds intriguing to you. However, you’re not sure if blacksmithing is really for you. After all, most of the guys you see on YouTube seem to have decent physical strength, right? Can you start hammering steel if you’re not a muscular guy or girl? In this article, I’m going to address this question entirely.

You don’t need to be strong to become a blacksmith. Blacksmithing is more about having proper technique and endurance. It’s also essential to have the right tools and setup that’ll help you work for long periods. You can start with a light hammer if you want. Your body will eventually catch up, and you’ll be able to use heavier ones after some time. 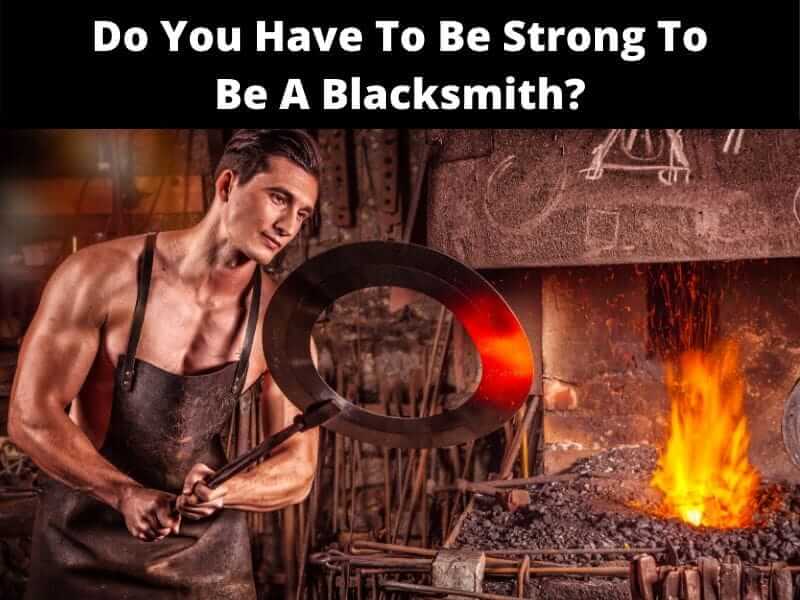 But how do you make sure you have the proper technique? What are the right tools and setup? Let’s answer these questions in detail, so you can get started hammering without letting your strength hold you back.

How Strong Do You Have To Be?

Blacksmithing is all about body mechanics. This means you don’t necessarily have to have muscles to get started (you will undoubtedly come out strong, though).

Brute force will only get you so far. In fact, I think it’s better if you’re not muscular because physically strong people tend to believe they can do it by themselves. They don’t follow the instructions properly.

I once had a friend swing a sledgehammer for me. He had been in the army and must’ve weighed like 50lbs more than me. Consequently, he decided not to follow my instructions on adequately handling the hammer. His forearms cramped up in like 15 minutes.

So it is that bodily strength isn’t the be-all and end-all of smithing – far from it. There are various other factors at play. So let’s talk about what other things you can do to work optimally as a blacksmith.

The Right Setup Will Boost Your Efficiency

The speed of your swings increases the force much faster than just the weight of its head. In other words, you’ll generate more power by swinging more quickly than by using heavier hammers. So, you should use a light hammer and swing it faster if you can’t quite handle a heavy one yet.

One more thing: don’t use a heavy hammer if you’re going to end up choking your hand to the top of it. You should have your hand as far down towards the end of it as possible.

You should swing from your shoulder down to your wrist. The hand muscles can also be included to get the motion going. Close your grip on the hammer as you start the downward swing.

Just to be clear: You should swing the hammer from your shoulder, not your wrist. Also, you want your blows to be as accurate as possible. All of this is mostly muscle memory, which will take you hours of hammering to build.

Now, apart from hammering correctly, there are a couple of other factors that influence how much you can work before your arms get sore. These are things that’ll help you get more work done in a shorter period.

For instance, properly setting the height of your anvil is quite crucial. If it’s too high or too low, your back will get sore much quicker.

Here’s a standard way to ensure that you have your anvil at the correct height:

You should also stand away from the fire while heating the work. Else your body will get dehydrated because of the heat.

Your Hammering Technique Is Crucial

Having proper technique is more important than you think. The secret to blacksmithing is hammering properly.

In the beginning, if you feel like you lack the strength part, you can make it up with proper technique.

But even if you’re muscular, improper technique can wear you down fairly quickly. Once you get the fundamentals down, you’ll see that it’s not so much about muscles as it is about technique and endurance.

Basically, you want to ensure that your technique works for you instead of working against you. How do you master the right hammering technique? The only way to learn how to hammer is by practice – a lot of it.

Driving nails is the best practice you can do to become a blacksmith.

Here’s a drill you can do to make sure you start on the right foot as far as technique is concerned:

This drill will improve your accuracy and will get you into the habit of hammering the same spot consistently. I’ve done this practice in the past, and I can tell you that it’s very beneficial.

Your Body Eventually Catches Up

Back when I started blacksmithing, it was quite hard for me to keep hammering the damn thing with a 2lb hammer. Give me a 4lb hammer, and you’d see me tapping out much quicker.

I had more time in the summer back then. My forge was also outdoors, making summer a more pleasant season for blacksmithing.

By the end of my second summer season, I had way more strength and was able to keep hammering for hours without breaking a sweat.

The more you hammer steel, the easier it’s going to get. When you start out, a 2lb hammer is going to feel awfully heavy after only an hour or two.

You’ll have to rest your arm and set your work on the anvil. However, as you practice more and more with the proper technique, you’ll get better at handling the hammer.

Your strength will improve, along with endurance and technique.

I know I’ve repeated myself enough times already. But really, if you’re a healthy person with an average body, you can get into blacksmithing and do wonders.

Don’t let the strength factor scare you away. I know women who are 5-foot-tall and weigh 95lbs and still manage to build fantastic stuff with remarkable efficiency.

Now you know the real role of strength in blacksmithing.

A lot of smiths waste much of their power and energy on trying to use their muscles. Their technique sucks. It doesn’t necessarily mean that their craft is also terrible; they probably produce exceptional items.

However, if only they would correct their technique, they can accomplish a lot more in the same timeframe.

So practice the drill I’ve suggested above, and make sure you have the proper technique down. Don’t worry about not being strong enough.

It’s obvious that you will get tired and will need to take breaks.

Give your body at least six months to adapt to this new habit, and you’ll be able to hammer thicker metals as well.

Hopefully, this article has been of help to you. Thanks for reading, and good luck with your future creations!