The renaissance in coal has prompted many blacksmiths to use it again for heating iron and steel. Of the various coal categories, the favorites are anthracite, bituminous, and lignite.

Bituminous coal is the most popular type of coal for blacksmithing, but it isn’t available everywhere. Lump charcoal is an alternative, but it’s man-made and not a naturally occurring fuel. The next best coal for forging is anthracite, though not all blacksmiths agree. Different coal grades have pros and cons. 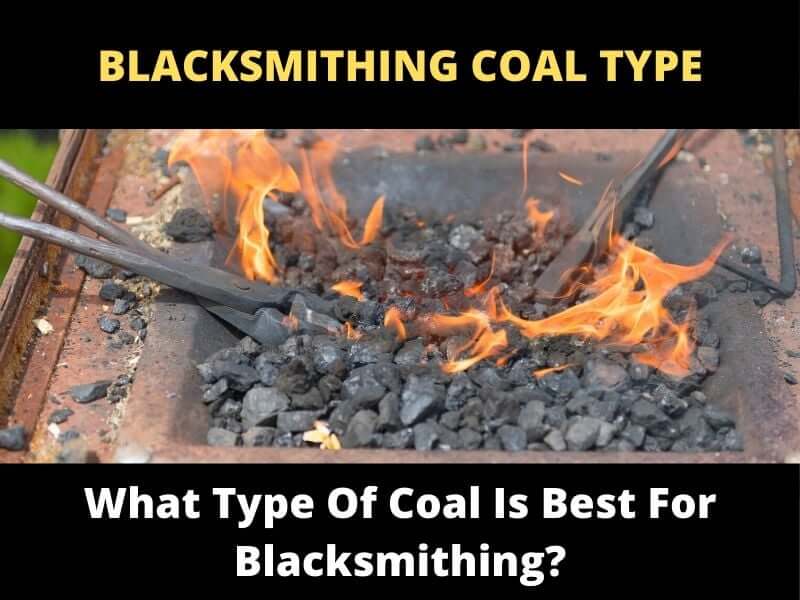 So we examined these fossil fuels further. Read on to familiarize yourself with the most popular blacksmithing coals and see which one is appropriate for your project or business.

Coal and propane are the fuels normally used in blacksmith forges *. Coal consists primarily of carbon. Its secondary ingredients are hydrogen, sulfur, oxygen, nitrogen, minerals, and other metallic and non-metallic elements. It is classified by rank and grade.

* A forge is a furnace or hearth for melting or refining metal. Forging means making or shaping (a metal object) by heating it in a furnace or fire, then beating or hammering it. [New Oxford American Dictionary]

It’s tougher to light coal than charcoal (which comes from wood), but the resulting forge burns hotter and longer.

This is because coal is hotter than wood, and it burns more efficiently. Thanks to its efficiency, blacksmiths need substantially less of it. One bowling ball-sized piece of coal is the equivalent of a five-gallon pail of wood chips in an hour’s worth of burning.

According to The Ploughshare, a school that teaches traditional craft, homesteading, and culinary skills, coal is graded according to its economic value, which depends on its mineral and impurity content.

The condition in which a coal type is formed determines its composition. This is why sometimes, a lump of low-ranked coal may be graded higher than a high-ranked one.

How Is Coal Ranked?

Coal is ranked by the amount of elemental carbon, water, and volatile matter in it. Its ranking is also determined by its heat content—aka calorific value. High-ranked coal contains less moisture and volatile matter than a low-ranked one. It also generates more heat.

What Are The 4 Types of Coal?

Check the coal ranking chart below to see a summary of all four most used types of coals:

Obtained from deep mines in Pennsylvania and Oregon, anthracite is the highest-ranking coal because it contains the most energy per pound and is the cleanest-burning among the coal types. It doesn’t produce any visible smoke. It’s also the hardest of all the coals. This metamorphic rock’s surface becomes shiny when cracked open.

Unlike bituminous coal, the coke particles anthracite produces are small and tend to blow off the fire. This means it cannot shield smiths’ eyes from the brightness of the heart of the fire. That’s why anthracite isn’t commonly used for blacksmithing.

Adams prefers hardwood charcoal over anthracite whenever bituminous coal is unavailable because anthracite is difficult to light up. It cools off quickly because it doesn’t have the insulated quality coke has with its porous nature. Even older smiths have warned him against using anthracite. Charcoal takes about 20 minutes to reach a forging temperature. Anthracite takes much longer.

Roy Adams, a blacksmith teacher who runs Christ Centered Ironworks, an online resource for blacksmithing education, did a series on alternative fuels where he experimented with various forging fuels.

Adams tested anthracite in the video below. He says forging with anthracite is doable if that’s what’s available, but he suggests sourcing alternatives, if possible.

Anthracite does have advantages over bituminous coal. It’s fairly smokeless, so it’s useful for demonstrations in public areas.

Unlike bituminous coal, anthracite doesn’t have much sulfur and impurities. It is readily available and fairly cheap.

This soft, black fossil fuel is the preferred forging coal of most blacksmiths. It has a low sulfur content.

This is important because sulfur lowers the quality of the coke, rendering brittle any steel item it comes in contact with. It also produces sulfur dioxide and sulfur trioxide, both air pollutants. When combined with oxygen and water, sulfur forms sulfuric acid, which corrodes the forge’s metal sections.

Compared to lignite, bituminous coal is mined from deeper mines and burns cleaner. Heritage Forge, a blacksmith workshop and craft store, claims some of the best specimens in the south come from mines near Birmingham, Alabama.

The advantages of bituminous coal are that it doesn’t need much air, and it creates coke, which holds heat for a very long time.

You can revive a previous fire several hours later without stroking it up. You can’t do this with anthracite, which requires constant airflow. A disadvantage of bituminous coal is that it isn’t available everywhere.

Adam tested bituminous coal in a video (check the video below). For his presentation, he used Miner’s Choice Nut Coal Anthracite from his local tractor supply hardware store.

Sub-bituminous coal is a dull dark brown to black and not shiny type of coal. It has a higher heating value than lignite and it is mainly used as a fuel for steam-electric power plants.

Sub-bituminous coal can be found in Montana, Colorado, Wyoming, New Mexico, Alaska, and Washington. A major place where it can be found is in Powder River Basin, Wyoming.

Called brown coal due to its woody texture and similarity to peat, lignite is the softest coal. It’s the lowest-ranking because it holds the highest amount of sulfur and nonburnable minerals among all the coal types. Lignite is either strip-mined or mined in open pits. Most Texas coal is low-grade lignite used in electric power plants.

Lignite isn’t suited for blacksmithing because it produces more clinker than any other coal type. Still, some smiths forge with it.

This is the sticky semi-solid mass that coagulates at the bottom of the fire pot after coal is burnt. It is composed of coal minerals that don’t burn off, such as metals and silicas.

Clinker buildup in a forge blocks airflow and draws heat away from the fire. Its contaminants interfere with forge welding in a hot fire.

This is the chunky residue made of pure carbon left behind after coal is burnt and tars, oils, and gases have been released.

Coke burns cleanly and hot, perfect for heating steel. Smiths also use dark layers of coke to cover the intense light emitted by the heart of fires, which is harmful to the eyes.

Commercial coke is also produced on an industrial scale. It’s denser and harder than the natural kind. Clean coke is the easiest to use as it requires less management than other fuels.

Blacksmith Joey van der Steeg says it’s not the coal nor the flames that produce heat but the glowing embers and the coke. In the absence of bituminous coal, he prefers coke over anthracite because the latter doesn’t have the same insulating properties as bituminous coal. (check his video below)

Coal is a mineral and a natural fossil fuel that takes millions of years to emerge. Charcoal is produced from wood. Despite being man-made, it produces more heat and is cleaner than coal.

The United Nations’ Food and Agriculture Organization explains that because charcoal is clean, it doesn’t contaminate metal. Its low density, however, means that more of it must be burnt for bigger heating jobs. This makes it very expensive for smithing. So smiths use coking coal more often as it’s considerably cheaper than charcoal.

If you insist on using charcoal, Whitlox Forge warns against using briquettes from groceries. Their non-carbon fillers and binders lower the maximum potential temperature of the fire. Choose hardwood lump charcoal instead.

Factors to Consider When Choosing Coal

Adams says the important part of the fire is the core. Smiths usually focus on how the core functions because it is where metal gets hot and where it oxidizes before it heats up.

When choosing forging fuel, Will Kalif, author of Blacksmithing for Beginners, suggests these qualities:

Where to Buy Coal

You can find coal for sale on Amazon. One Bituminous Coal 50 lbs package contains 50 pounds of 1″ to 3″ nugget coals.

Go for the kind that is metallurgical grade because it produces sufficient heat, low smoke, and low sulfur.

If bituminous coal isn’t available in your area, use charcoal. Be prepared, though, for the added expense. Otherwise, rustle up some anthracite or switch to a different fuel source completely.

I hope this article was useful. Thanks for reading and good luck with your smithing projects!