If you’ve ever watched a blacksmith creating tools with a hammer and an anvil, you probably noticed that they seem to tap the anvil with the hammer just as much as they hit the tool they’re actually forging. But, the reason a blacksmith hits the anvil in between strikes is not that they have a poor aim or aren’t good at their job.

Blacksmiths hit the anvil between strikes to keep momentum and rhythm up. It allows them to keep a steady rhythm with the hammer while planning out their next move, readjusting their grip, or flipping the hot item over. These light taps can also help when their hands become tired. 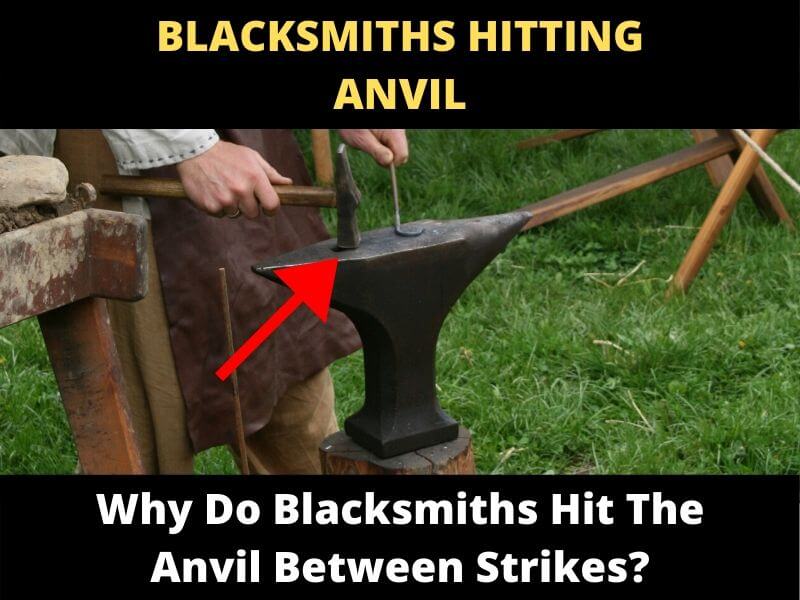 The Purpose of the Anvil

To mold any type of heavy metal into a specific shape, the metal first needs to be heated. Once properly heated, the metal can be placed on the face of an anvil, which is basically a large piece of steel or other forged metal with a flat top.

A blacksmith will then use a specialized hammer against the hot metal on the anvil to begin shaping it into the desired form. To achieve different shapes to this metal, a blacksmith can use the anvil’s horn for curved designs or the heel to actually bend the metal.

What Tapping the Anvil Means

When we talk about a blacksmith hitting the anvil, we’re not talking about full strikes on the anvil as if they were forging a tool. These are usually a series of a few light taps in the same rhythm of the previous strikes before returning to the actual tool.

In fact, intentionally striking just the anvil with a hammer at full-speed can actually damage the anvil and lead to greater problems down the road. If a blacksmith begins forging a tool in this damaged area, the tool might have an indent or bulge.

These are just light audible taps, not strikes! Tapping requires significantly less effort and less range of motion in the arm, simply allowing the hammer to gently bounce off of the anvil with each tap.

A lot of people assume that a blacksmith will tap the hammer against the anvil as a way to actually cool the hammer down during the forging process. In actuality, tapping the anvil with the hammer doesn’t cool it down at all and, in fact, might heat it up a little more.

But, the issue here isn’t that this is factually inaccurate. The major issue is that the last thing a blacksmith wants to do when forging a tool is cool the hammer down. The cooler the hammer, the cooler the metal will get, and the more difficult the metal will be to mold into the desired tool shape.

Time is definitely of the essence when you’re a blacksmith, so having to constantly reheat the metal will just eat up more unnecessary time.

As much as a blacksmith needs to work quickly when forging to prevent the metal from cooling down, one wrong strike can leave the final outcome looking botched. Sometimes, a blacksmith needs a little extra time between strikes to figure out what their next move is going to be.

This is usually the time where a blacksmith will evaluate their work and determine what needs to be done to complete the job.

Instead of stopping the hammer rhythm altogether and then restarting with the heavier strikes, a blacksmith might tap the anvil to keep the momentum and rhythm up.

As soon as they figure out what they’re going to do next (hit a specific part of the metal or flip the tool over), it’s much easier to transition to forging when the rhythm has been consistent.

Using full-powered strikes when forging a tool is necessary for molding the metal much more easily. However, it can be very tiring on the hand, wrist, and elbow, even if a blacksmith is rather skilled in their field.

Another reason that a blacksmith might tap the anvil is to actually rest their working hand. An especially useful tactic of a blacksmith is using a heavy hammer that causes a little extra strain on the arm.

Starting and stopping the motion with a 3 ½ pound hammer can be even more tiring than these light taps between strikes.

That’s especially the case when stopping a strike mid-blow, which definitely puts a lot of stress and strain on the joints of the upper body.

Even if a blacksmith has incredible grip, there’s always a chance that the grip will slip while forging a tool.

Rather than completely stopping and readjusting the grip with two hands, a blacksmith might tap the anvil a few times while using their fingers to crawl up or down the hammer’s shaft. After a few taps, the grip should be perfected, and the blacksmith can return to the forging.

There’s no sense in stopping the hammering altogether when the grip adjustment takes only a second or two in the first place.

Though forging metal objects is usually considered to be a one-man job, there are a few situations where blacksmiths will work together on a specific project. If that’s the case, it doesn’t make much sense for more than one blacksmith to use heavy hammers at the same time in rather close proximity.

Not only is that a safety issue, but it practically guarantees the job will come out looking a little funky.

Tapping the anvil is a great way to keep both blacksmiths in rhythm: One working directly on the metal and the other waiting for their turn by tapping the anvil. When one blacksmith is done with their portion, the other steps in and does their job.

Is It Necessary for Blacksmiths to Hit the Anvil?

But it can be quite useful!

Though tapping the anvil between major strikes definitely helps to make the forging process easier, it’s in no way necessary to complete the job. A lot of blacksmiths find themselves tapping the hammer on the anvil, even when they’re using a rather light hammer.

It becomes like second nature for many blacksmiths and can be rather difficult to quit after years in the industry.

In fact, tapping the hammer on the anvil in excess just wastes a lot of energy and prolongs the amount of time it takes to forge.

The anvil and the hammer are the major tools that any blacksmith needs to forge. It’s pretty cut and clear how forging works, but blacksmiths have made the industry their own over the last several centuries.

In the process, “tapping” the anvil in between strikes became the norm.

Regardless of why a specific blacksmith hits the anvil, there are quite a few logical reasons for this behavior.

Not only does it save energy, but it also allows a blacksmith the time to think and plan out their work to create the best product.

I hope this article was useful to you. Good luck with your future projects!