One of the most common questions in the world of power tools is whether an impact driver can double up as a drill. It’s a valid question, too, especially since an impact driver uses the same rotational motion as a drill to function, not to mention the striking physical resemblance between the two power tools. 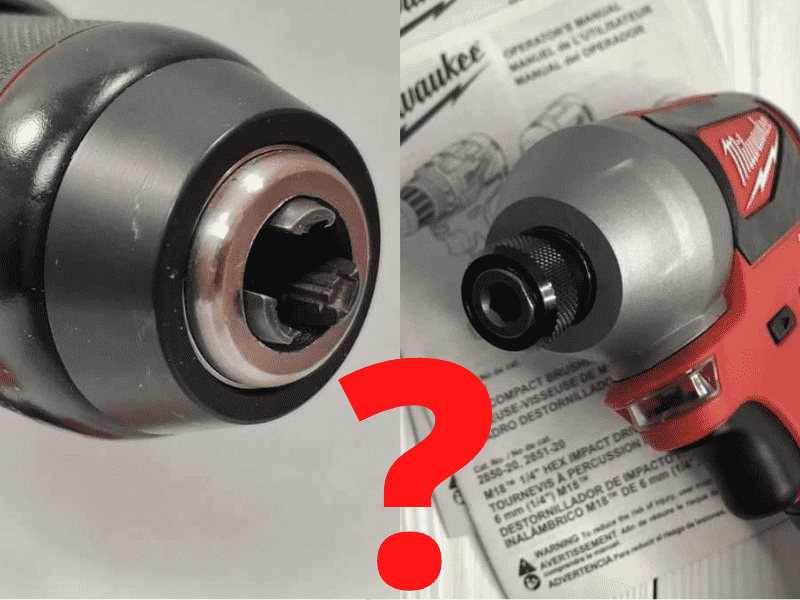 Read on to learn all about using an impact driver as a drill, the ramifications of that decision, and an in-depth explanation for why you shouldn’t completely ditch your drill for an impact driver.

Can an Impact Driver Drill Holes?

According to popularmechanics.com, impact drivers can double up drills in some situations. However, using an impact driver to drill holes comes with its fair share of limitations. A lot of this has to do with drill bit-impact driver compatibility; you can’t use just any drill bit on an impact driver.

Typically, impact drivers collets are only compatible with a ¼” hex shank driver bits. For comparison purposes, cordless drill chucks are compatible with ⅜” or ½” hex shanks, while corded drills have ⅜”, ⅝”, ¾”, or ½” chucks.

What does this have to do with using an impact driver to drill holes?

So while an impact driver’s standard ¼” hex shank drill bit may be adequate for drilling small holes on “soft” materials such as light gauge steel or softwood, it won’t cut it when you want to drill larger holes on “hard” materials like heavy steel.

Secondly, not all ¼” hex shank drill bits can bear the impact that the driver unleashes on a bit.

In fact, your standard hex shank drill bit will likely snap or detach from the shank if you put it on an impact driver and try to drill holes on a tough surface like heavy steel.

Why? Because a standard drill bit isn’t designed to withstand the power and torque of an impact driver一it’s just too brittle.

The standard bit is meant for a drill, which usually packs less torque and power than an impact driver.

So by putting such a bit in an impact driver, you’re abusing it as far as intended usage goes, hence the likelihood of snapping or detaching from the shank.

If you insist on using an impact driver to drill holes, you’ll need bits specially designed for this purpose.

These usually have more torsional strength than standard bits, allowing them to bear the brunt of abuse delivered by an impact driver.

They also have a higher breaking angle to maximize flexibility under pressure, which further helps prevent breakage.

The superiority of a specialty impact driver bit is largely due to the tip design. The tip is specially engineered to transfer excess vibration and impact stress from the bit to the typically extended torsional zone.

Without getting too technical, this helps distribute the pressure exerted on the bit, preventing breakage.

Can an Impact Driver Replace a Drill in Your Toolbox?

Having learned that an impact driver can be used to drill holes, you’re probably thinking you can forgo buying a drill and instead purchase specialty bits for your impact driver.

This makes sense from a financial perspective because drills cost more than specialty bits. However, the same can’t be said from a functional standpoint.

An impact driver can’t effectively replace a drill. Sure, you can pair one of these with an impact-rated bit for the occasional light drilling, but that’s just about it. You’ll need a drill for heavy-duty drilling applications that require a specific depth, roundness, and utmost precision.

There are two reasons why an impact driver can’t match the operational efficiency and precision of a drill:

Does An Impact Drill Have a Chuck?

One of the primary distinctions between a drill and an impact driver is that the latter doesn’t have a 3-jawed chuck. Both corded and cordless drills have this feature, and it’s for a reason. Instead, impact drivers have a “quick change” or “quick release” type of chuck.

A 3-jawed chuck is an adjustment mechanism that lets you attach and tighten a drill bit. It’s the feature responsible for facilitating switching between different drill bits, allowing you to match your bit size to a specific application for better results.

The presence of a chuck is why power drills can accommodate a wider selection of bits than impact drivers.

It’s also one of the reasons an impact driver can’t effectively replace a drill because when your power tool can’t accommodate the bits required for your project, you’ll likely end up with substandard results.

Note that while the lack of a 3-jawed chuck is a drawback when it comes to drilling, it’s one of the reasons that impact drivers are better at driving screws.

Does An Impact Driver Have a Clutch?

Another notable distinction between impact drivers and drills is the lack of clutches in the former power tool. As you might have guessed, power drills have a clutch, and it contributes to their operational efficiency.

Also known as slip clutch or torque control, the clutch is the adjustable collar behind the chuck.

It has numbers that denote the twisting power (AKA, torque) applied to the drill bit. The higher you set this number, the more the torque, and the deeper you drill.

Having a clutch allows you to use the right torque for your bit size and material. Generally, large, fat bits require more torque ( and vice versa), and the same can be said for harder surfaces.

Indeed, a clutch is a crucial control feature for precision drilling and the fact that impact drivers lack it means you can’t use them for applications that require accuracy.

That’s because even when paired with specialty bits, impact drivers don’t provide nearly the same operational flexibility and precision as drills due to the lack of a clutch and chuck. I hope that clears things up.