One of the most common questions in the oil and gas industry is if it’s possible to drill a well without hitting water. It is also a question that has been debated for a long time. The answer to this question depends on where you are drilling and what type of rock formation you are drilling through.

You can drill a well and not hit water if you drill through an impermeable layer of rock instead of an aquifer. Other reasons you might not hit water include too much pressure applied when drilling or that you didn’t drill deep enough to reach water. 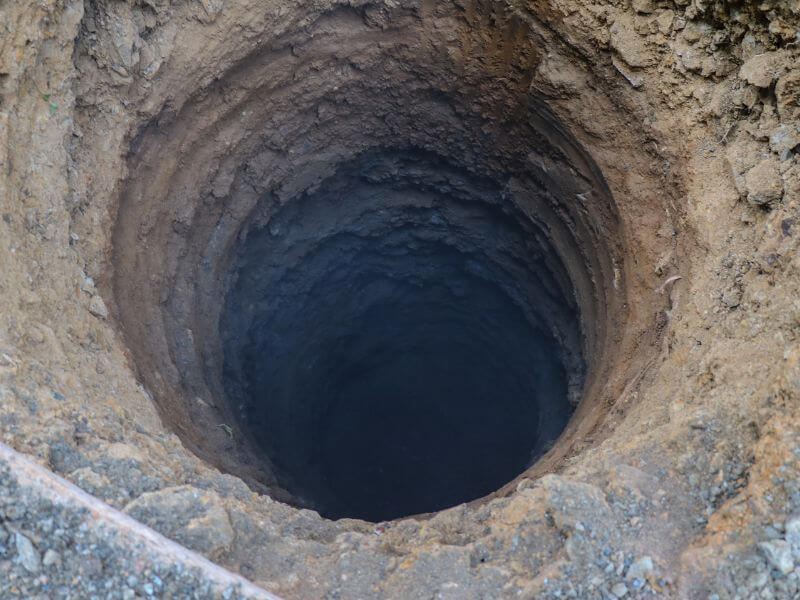 Many factors can affect whether or not you will hit water when drilling a well. Keep reading to understand how a well works and why drilling for a well does not hit water sometimes. I will also explain why sometimes wells that deliberately avoid water sources are dug, so read on.

Understanding Wells and How They Work

Wells are drilled to extract natural resources such as oil, gas, and water.

They are drilled by drilling rigs that use a drill bit to bore through the earth.

A well is a shaft bored or drilled into the earth’s surface to access underground water or oil and gas reserves.

A well can also be sunk into an aquifer to access groundwater.

Wells can be used for many purposes, including irrigation, livestock watering, industrial uses, and recreation.

When a well is finished, the well driller tests for water using a hydrologic analysis of the sample.

If water is found in the drilled area, it is pumped out of the borehole, then treated or stored according to how much water can be taken out.

The well driller will then use the hydrologic analysis to determine what kind of water is found and how much.

The research will show whether or not the water is fresh, clean, salty, or of some other source.

Oil and gas wells are drilled to extract oil and natural gas from underground reservoirs.

What Are the Possible Reasons Behind Drilling a Well and Not Hitting Water?

When drilling a well, there are many signs that you may have found water.

But on the other hand, when someone drills a well and does not find water, it is not because of the difficulty in finding water sources or the drilling ban.

Here are many reasons someone would drill a well and not find water.

The significance of not hitting the water after drilling a well is that it shows that the ground or earth below the surface is dry.

This means there are no natural sources of water in the area.

Water sources are essential for life but can also be a problem.

They can cause flooding in your home and make it hard to drill a well.

This technique involves going sideways from the surface instead of straight down, which reduces the risk of hitting water.

Horizontal drilling is one of the best techniques for drilling wells without water because it reduces the risk of hitting a water source.

Moreover, it is often possible to drill through many layers of rock and reach the water source.

In some cases, drilling through just one layer of rock can yield enough water for a family.

There are many reasons behind drilling a well and not hitting water.

One of the most common reasons is that there was never any water where you drilled or that there was too much pressure, so you dug into another layer of rock.

There are also times when people are drilling for oil but find no water because they drill through it without realizing it.