The battery is the most important part of your cordless drill. If you happen to completely run down your drill battery and don’t have an extra or you’re concerned about leaving your battery in the charger, you may be wondering how long it takes to charge.

In this article, we’ll discuss the charging times of different cordless drills, including popular brands such as Dewalt, Makita, Milwaukee, Ryobi, and Black and Decker. 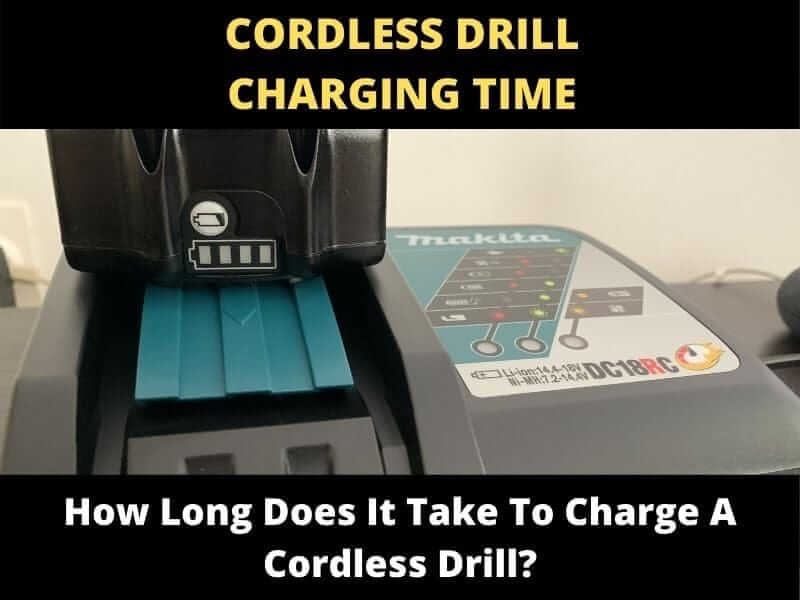 How Long Do Lithium-Ion Batteries Take to Charge?

Cordless drill batteries have improved over the years, and most popular brands now use Li-Ion (lithium-ion) batteries. These batteries deliver more power, have higher capacity, and longer run times.

As a result, Li-Ion batteries take less time to charge than other batteries. Typically, lithium-ion batteries charge between 30 minutes to 3 hours.

We’ll take a look at the cordless drills from top brands such as Dewalt, Makita, Milwaukee, Ryobi, and Black and Decker and compare their charge times and battery capacities.

How Long Do Ryobi Cordless Drill Batteries Take to Charge?

The charge time for a Ryobi battery mainly depends on the type of charger. If you’re using an 18V ONE+ lithium-ion battery, you can charge it with any Ryobi ONE+ charger (Amazon affiliate link).

The charge time will vary from charger to charger, depending on the charge rate and the battery power.

Here’s a complete list of the different Ryobi chargers and their charge times, according to Ryobi:

These charge times are only referenced from Ryobi and may be different in a real test scenario. You may also check your service manual for specific charge times.

How Long Does a Makita Cordless Drill Battery Take to Charge?

It puts itself ahead of its competitors by using smart systems and features that draw charge quickly and efficiently.

Not only does Makita have an industry-leading charge time, but it also delivers longer runtime than other Li-Ion batteries with similar capacities.

Below, I summarized the various Makita batteries and their charge times:

How Long Should a Dewalt Cordless Drill Battery Spend on the Charger?

Dewalt batteries are mainly available in 20, 60, and 120 volts. Since they are higher capacity batteries, you can expect them to sit on the charger for longer.

Different Dewalt chargers have varying charge rates and some can take up to 3 hours or more to fully charge a battery.

If you own the Dewalt 12/20V MAX Charging Station, it will charge your 4 Ah battery in about 90 minutes, and a 3 Ah battery in 60 minutes.

Since Dewalt doesn’t clearly state exactly how long it takes to charge their batteries, you may have to check the service or instruction manual that comes with your product.

What Is the Charge Time of a Milwaukee Cordless Drill Battery?

Milwaukee is one of the world-leading companies when it comes to cordless tools and batteries. Its M12 and M18 Li-Ion batteries (12V and 18V) are known to deliver some of the best runtime, power, and speed in the industry.

The standard Milwaukee M18 & M12 charger can charge a 12V or 18V battery in 40 to 60 minutes, depending on the battery’s capacity.

A better upgrade is the Milwaukee M18 & M12 Rapid Charger. The Rapid charger can charge up to 40% faster.

The recently-released Milwaukee Super Charger charges even faster. Milwaukee claims that it charges the M12 and M18 batteries up to 4x faster.

As a result, it can charge an 18V, 12.0 Ah battery in just 1 hour, while the standard Milwaukee charger will take about 240 minutes to charge it to full capacity.

Here’s a summary of the various Milwaukee batteries, chargers, and charge times:

Note that these charge times are only based on results from some Milwaukee tools and actual test results may vary slightly.

How Long Does a Black and Decker Cordless Drill Take to Charge?

As you’ve seen in the article, charge rate and charge times vary from product to product. Makita batteries charge faster than other batteries in the cordless tool industry because of the advanced technologies they use.

If your drill battery is taking longer than normal to charge, there may be a problem with your battery. Also, I don’t advise leaving your battery in the charger when it’s fully charged as it can reduce its lifespan.