When you use a cordless drill, perhaps you’ve noticed a dial near the drill head with different numbers or symbols on it. If you have, you’ve probably wondered to yourself, “what are the numbers and symbols on a cordless drill and what do they do?” 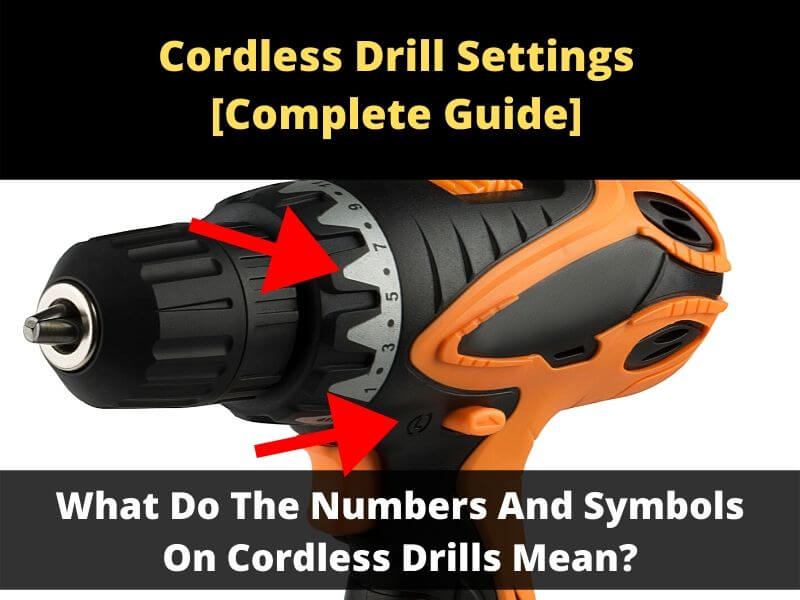 Now that you know what the numbers on a cordless drill mean, let’s take a closer look at this in more detail below.

So, if you’re ready to learn more about cordless drill numbers and/or symbols, then let’s get started!

What Do the Numbers Represent on a Drill?

On most modern drills you can find two areas with numbers.  One is the gear selection and the other is the torque control.

How Do You Change Drill Torque Control?

As mentioned at the beginning of the article, the numbers on a drill represent the amount of torque the tool can apply to an object (such as a screw) or for hole drilling.

The higher the number, the greater the force or torque.

This feature is very useful. It not only allows you to adjust the amount of turning power applied to prevent screws from being stripped, but it also provides the ability to bore holes in hard materials such as wood, concrete, masonry, and metal.

The numbers usually range from 1 to 20 (or more) with 1 representing the least amount of torque and 20, the greatest.

Some drills can have a range of over 20. It depends on the manufacturer and drill model.

To adjust the torque control on a drill, follow these 6 simple steps:

It’s very important to test a drill out before you use it on your next woodworking project.

You need to be aware of how much power the tool has and how it will react and/or handle.

Too much torque can be hard to handle and it will strip screws, whereas too little can be tedious.

Over time, you’ll get a ‘feel’ for how the drill handles.

The more you use it and test its capabilities, the easier it’ll be for you to choose which torque setting is best for each project.

Becoming familiar with the settings is the key to using the tool effectively.

This sounds like such a basic and insignificant thing to do, however, it’s extremely important.

The more ‘in tune’ you are with your tools, the better you’ll be able to handle (and work with) them.

Here is a nice video demonstrating how torque control works. The guy in the video is using different settings to drive some screws.

The torque settings on a drill refer to how fast the tool will spin.

When you press the trigger and the drill speeds up, the torque setting will determine how many rotations it makes, once you choose a specific number setting.

The higher the number, the faster it’ll turn. Some tools have 2-speed settings or even 3.

What Do The Symbols On A Drill Mean

At the end of this section, you can find a table so you can see easily what they do.

The symbol for the drilling mode has the shape of a drilling bit.

Or if you want is like that of an old barber-style sign or part of a candy cane (think white and red swirls). Or at least that’s what it reminds me of!

Of course, the symbol on the drill is usually not red and white but rather black and yellow, depending on what company manufactured the hammer drill.

This mode is used to drill in cast iron (metals), wood, or plastic (but not stone or masonry).

It automatically puts out the maximum amount of torque that the drill can have ignoring the torque settings.

If the drill doesn’t have a mode selector then the highest torque setting is marked with the symbol of a drill bit.

The small screw symbol means that in this mode the drill is used to drive screws. When you drive screws the torque setting is important because you don’t want to overdrive the screw and bury it into the material.

The symbol that looks like a hammer signifies the hammer action mode or the hammer drill settings.

This mode is used when you want to drill into concrete, stone or masonry.

It allows drilling into brittle materials without too much user applied force. If you were to try this without the hammer setting, you wouldn’t have much luck making a hole in concrete!

The hammer action function makes all the difference when it comes to drilling hard surfaces.

What’s the Reverse Switch Symbol on a Drill?

We can’t forget about the reverse switch function, which is usually found just above or behind the trigger of the drill.

You will either notice a small button or a small lever.

There isn’t a universal symbol for this function.

I have a few drills and the one has an arrow in a circle going one way on one side and the other way on the other side.

On another drill, it looks like a wedge facing one way on one side and the other way on the other side.

What Does ‘Nm’ Mean on a Cordless Drill?

Torque is measured in Newton Metres or ‘Nm’, which is the force that allows an object to rotate.

This is the best way to gauge how powerful your drill or impact driver is.

The higher the number in Newton Metres, the more twisting force your drill will have.

We’ve been discussing torque (and its symbols or settings) on a normal cordless drill.

Regarding a cordless impact driver, it’s important to note that these tools do not have a torque control.

The only way to adjust torque on an impact driver is to use the speed control trigger.

Or, if you’re just searching for a new drill, choose an impact driver with gears.

More advanced models have up to three gear ranges.

You’ll spend a bit more money, but in the long run, it’s probably worth it!

What is a High Torque Drill? (Speaking of Torque)

This allows the tool to perform a variety of tasks, from mixing paint and plaster to drill pilot holes in dense wood or thick metal.

The Makita LXT Lithium-Ion cordless drill ½” hammer driver-drill is considered the most powerful tool on the market today! The brushless motor can deliver 1,090 in. lbs. Max Torque.

It can reach speeds of up to 2,100 RPM and covers a wide range of drilling, driving, and hammering applications.

So, why not go online and check it out at Amazon.com today! Your next DYI project will be hit.

To summarize, the numbers on a cordless drill represent the torque or rotary force of the tool.

The higher the number, the greater the torquing power.

This is a very useful feature on a drill.

Not only does it allow you to adjust the amount of twisting power applied to screws, but it also provides the ability to bore holes in very hard substances such as wood, concrete, masonry, and metal.

Hopefully, you’ve found the information in this article helpful. Good luck with your future woodworking or DYI projects!