Cast iron is extremely heavy and is generally more difficult to cut than standard steel. When trying to cut cast iron, you may struggle to find the correct tool to use so you can avoid purchasing new devices.

You can cut cast iron with a plasma cutter torch, but this is not the best method to use. If you need to cut cast iron, your best options are to use either a snap cutter or a tool with a diamond blade.

This article will reveal the best torch to use when you cut cast iron and divulge which tools are preferable for this task. 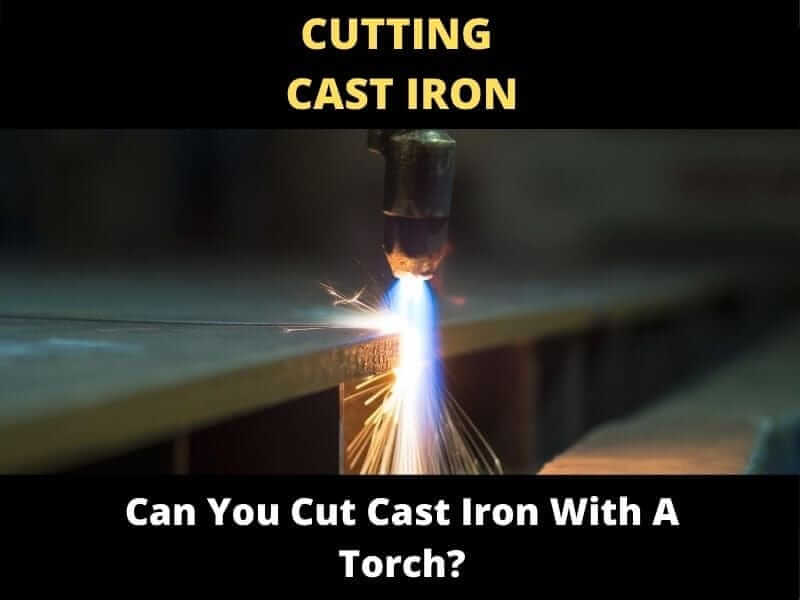 Cutting cast iron may be necessary because it is very heavy and prone to rusting.

Especially because many pipes are made of cast iron, you may need to remove rusted sections and replace them or cut cast iron pipes before moving them.

To do this, you can’t use your standard oxy-fuel torches but could use a plasma cutter torch.

Oxy-fuel torches are by far the most common torch used for cutting but are not usually used to cut cast iron.

Conversely, plasma cutters are much less common but have a unique advantage due to their ability to cut metals like stainless steel and cast iron.

Oxy-fuel torches are extremely versatile, and they can cut much thicker metals than plasma torches- they can typically cut steel that is up to 20 inches thick.

Furthermore, these torches can be used for cutting, welding, heating, and other purposes.

Oxy-fuel torches work by heating the steel to its ignition temperature using its oxygen gas flame.

When it is preheated, an oxygen jet creates a chemical reaction between the oxygen and the metal, allowing it to be cut.

Generally, oxy-fuel torches are used for heavy metals such as steel and are frequently used in scrap yards to cut scrap metals.

These torches should not be used to cut metals like cast iron, aluminum, or stainless steel. With effort, you may be able to cut cast iron with an oxy-fuel torch, but it will probably be a very rough and uneven cut.

Plasma cutters are less commonly used than oxy-fuel torches because they only cut metals that are about an inch thick or less.

However, they can be used to cut cast iron and stainless steel, which oxy-fuel torches are unable to do. Moreover, plasma cutters are faster than oxy-fuel torches because they do not require preheating.

Plasma cutters work by adding electricity to compressed air, which creates plasma gas that is conductive.

Adding more electricity makes the plasma cutter hotter and enables you to control how powerful you want the cut to be.

Although plasma cutter torches can cut cast iron, they may cost up to $3,500 and may cause your electricity bill to surge.

There are much more efficient ways to cut cast iron, such as a snap cutter or diamond blade.

Snap cutters (or pipe cutters) are frequently used to cut cast iron and tend to be the chosen cutting method for plumbers and people who need to make many cuts on cast iron pipes.

Eventually, the chain will become so tight that the pipe will snap. This method is a quick and relatively easy way to cut cast iron pipe.

Another benefit of snap cutters is its ability to easily make multiple cuts. Cast iron is extremely heavy, and if you need to remove a large cast-iron pipe or simply want to shrink it into a more manageable size, you can quickly cut it into multiple sections using a snap cutter.

While snap cutters are an excellent option for cutting cast iron pipes, their tightening method has risks.

For example, tightening the chain around the pipe can cause the pipe to bend or be crushed instead of snapping.

Another limitation is space- this tool works best in pipes that are solidly above ground. If you need to crawl into a tighter space when cutting cast iron, you should use a diamond blade.

When using metal to cut cast iron pipes, it is vital that you use a diamond blade. Regardless of what tool you use, a diamond blade will produce the smoothest cut.

Moreover, diamond blades are the most resilient against cast iron, as many standard metal blades can only be used on cast iron once before breaking or failing.

Although they are more expensive, diamond blades labeled for cast-iron cutting can make multiple cuts without breaking.

Your ideal choice is about a 4 1/2-inch diamond wheel that is designed for metal. For example, this DiamondX All Purpose Heavy Duty Metal Cutting Diamond Blade from Amazon (affiliate link) is made with diamond and is the ideal size.

An angle grinder will cut through cast iron quickly and does not require much effort. These tools create sparks, so you should be sure to wear proper protective gear when you use them, including eyeglasses and work gloves.

Fortunately, diamond blades on angle grinders will last for a long time, so you can use it to cut multiple sections of cast iron.

Reciprocating saws with diamond edges are a good option for cutting through cast iron. When using a reciprocating saw, one thing to keep in mind is maintaining a steady speed- if you cut too fast, the saw may overheat.

Additionally, if you make the cut from one side then the other rather than immediately cutting all the way through, you will obtain a cleaner cut.

This Diamond Grit LENOX Tools Reciprocating Saw Blade from Amazon(affiliate link) is an example of a blade that will cut through cast iron. The diamond parts of the blade allow it to make a sharper cut, and you can use it to cut with relative ease.

Most diamond-edged reciprocal saw blades are sold in packs of multiple blades because the cast iron’s strength will kill the blade and does not allow multiple uses.

While this can become expensive, it is still a great option for cutting a cast iron pipe one or two times. If you need to make many cuts in your cast iron, a snap cutter is probably the best option.

When cutting cast iron, it is best to use a snap cutter, angle grinder, or reciprocating saw.

If you are using an angle grinder or reciprocating saw, you should use a diamond blade to maximize effectiveness without wasting standard metal blades that would be ruined if used on cast iron.

Generally, snap cutters are the most efficient way to cut multiple sections of cast iron and can be used many times.