Maybe you’ve been in this situation before. You need to set a screw into a wall, to hang a picture or a piece of art, for example, but you don’t have a screwdriver or power drill on-hand. Now what? Looking through your toolbox, you find a hammer. Perhaps you’re thinking to yourself, “it is possible to hammer in a screw?” Well, here’s your answer:

Yes, a hammer can be used to set a screw into drywall or gypsum, for example. However, the threads of the screw are likely to rip a hole large enough that the screw will just pop back out again! Or, if it does stay set, it won’t be fixed securely enough to support any weight. It’s best to hammer in a nail that’s slightly smaller than the screw first, remove the nail and then insert the screw. Better yet, use the appropriate tool, such as screwdriver or power drill, whenever possible. 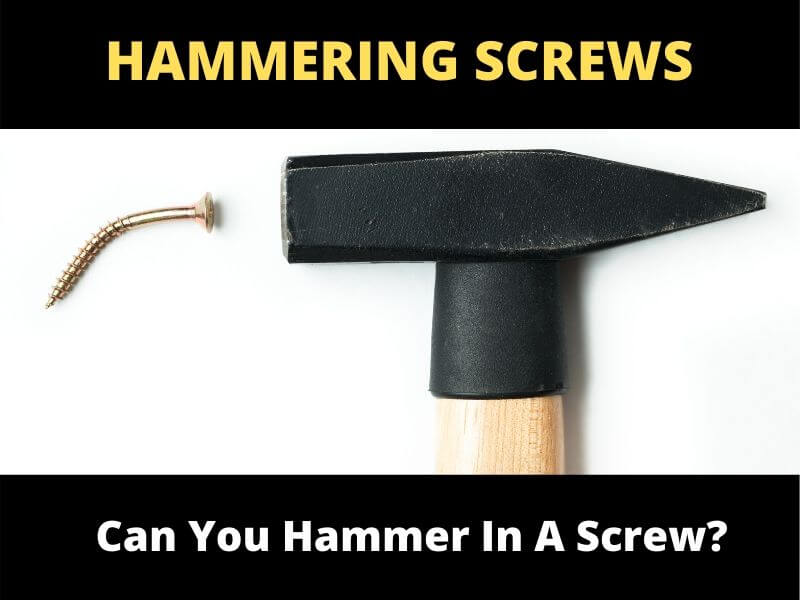 Professional drywallers quite often will hammer in a screw or two when they first put up a sheet of Gyproc, just to hold it in place. Then, they will proceed to use a drill and drive in the screws for the remainder of the board. It’s a cool “hack” but must be done right so as not to ruin the plasterboard!

Now that you know you can hammer in a screw, let’s explore this in more detail below.

I’ll discuss how to set a screw in a wall properly using a hammer. I’ll also explain what happens when you use a hammer to set a screw and why this can sometimes be a problem. I’ll even give examples of when you might need to use a hammer instead of a screwdriver or power drill on a screw.

And now, if you’re ready to learn more about using a hammer to set a screw, then let’s get to it!

Can You Hammer in a Stripped Screw?

You can try to hammer in a stripped screw. It just depends on how fragile the material you’re working on is.

This technique involves hammering the screwdriver into the screw head just enough to provide a firm position for unscrewing in the future.

What Happens if You Hammer a Screw?

With a large enough hammer (and plenty of force), you can drive a screw effectively into a piece of wood. Just be careful not to wreck your wall (or worse, hurt yourself) in the process!

From my own experience, I know that hammering in a screw is likely to snap it. They aren’t designed to be hammered like a nail.

The shearing strength of a screw isn’t as strong as a nail. On the other hand, a screw typically has a much stronger holding strength because of its threads versus a nail that has a smooth surface.

How do You Nail a Screw?

If you need to set a screw in a wall to hang a musical instrument or a picture, for example, but don’t have a screwdriver or power drill handy, then try doing the following:

If it happens that the hole ends up being too big, you can try to fix it with some liquid glue, like Elmer’s, for example.

Then, take some toothpicks and place them into the glue-filled hole, completely covering it. Next, snap off the toothpick ends so they’re flush with the wall surface. And finally, re-set the screw properly into the repaired area.

Is it Bad to Hammer a Screw into a Wall?

Hammering a screw into a wall can be considered “bad” if you accidentally make too big of a hole that the screw just ends up popping right out!

This could damage the wall and/or cost you time and money to repair it. Whenever possible, use the correct sized screwdriver for the job.

Or, if you’re lucky enough to have a power drill handy, turn it on at low speed to carefully and accurately set a screw.

Sometimes when materials are not readily available and you need to put a wall plug into a wall but don’t have a drill bit to make the hole, you can use a screw. Hammer the screw into the wall and then wiggle it around using pliers.

This will make the hole a bit bigger, allowing you to pop the plug into the wall. You can then set the screw into the wall plug. Sometimes, you just have to be creative to make things work!

When is it Necessary to Hammer in a Screw?

The only time it’s “really necessary” to hammer in a screw is if the screw is stripped and can’t be properly inserted with a screwdriver or power drill.

Stripped screws are usually the result of not using your tools correctly. For example, turning screws in with a screwdriver or power drill at an angle rather than “head-on”. Or, using the wrong sized screwdriver for the job, especially one that’s too small.

As I mentioned earlier in the article, you could hammer in a screw when hanging drywall, just to hold the sheet into place so you can drive in the rest of the screws.

Other than that, there really is no reason why you need to hammer in a screw. Unless, of course, you’ve lost your screwdriver or your power drill isn’t working!

What do You do if a Screw won’t Go in?

If a screw won’t “go in” with a screwdriver or power tool you can try hammering or tapping it the wall.

However, you must be careful when doing so as you run the risk of ruining your wall. You could end up puncturing a larger than necessary hole into the wall, wrecking the drywall.

This will then require you to patch, sand, and re-paint the area. A costly and time-consuming fix you’ll want to avoid, if possible!

Don’t forget that applying to much force to a screw can end up snapping it.

If you have ever done this, you know how much of a “pain in the butt” it is to try and pull out a screw when the head is snapped off!

Especially, if whatever is left is completely embedded in the wall or wood. Good luck fixing that!

Related article: How to Organize Screws

To conclude, you can use a hammer to set a screw into some types of materials such as wallboard or plasterboard.

However, by doing this, you run the risk of ripping a hole so large that the screw itself will simply pop back out again!

If by chance, the screw does stay set, it won’t be fixed securely enough to the wall to support any real weight.

What you should do instead is gently hammer in a nail that’s slightly smaller than the screw first, remove the nail and then carefully insert the screw.

This will save you from possibly wrecking your wall by putting too big of a hole in it, requiring you to then fix the damaged area.

It’s better to err on the side of caution and use the proper tool, like a screwdriver or power drill instead.

Hopefully, this article has been of help to you. Thanks for reading and good luck with your next home improvement project!