When you’re erecting any length of fence, you’re always on the lookout for tools that can help you get the job done faster. Multi-use tools are always great for accomplishing the same job without a bunch of extra supplies. Fencing pliers come up in discussion a lot, but what exactly are they, and how do they work?

Fencing pliers are a durable set of pliers equipped with various attachments to perform each of the tasks associated with erecting fences. There’s a hammerhead, several crimping jaws, and a claw on the back. Having all these features makes these pliers a great buy for any fence builder. 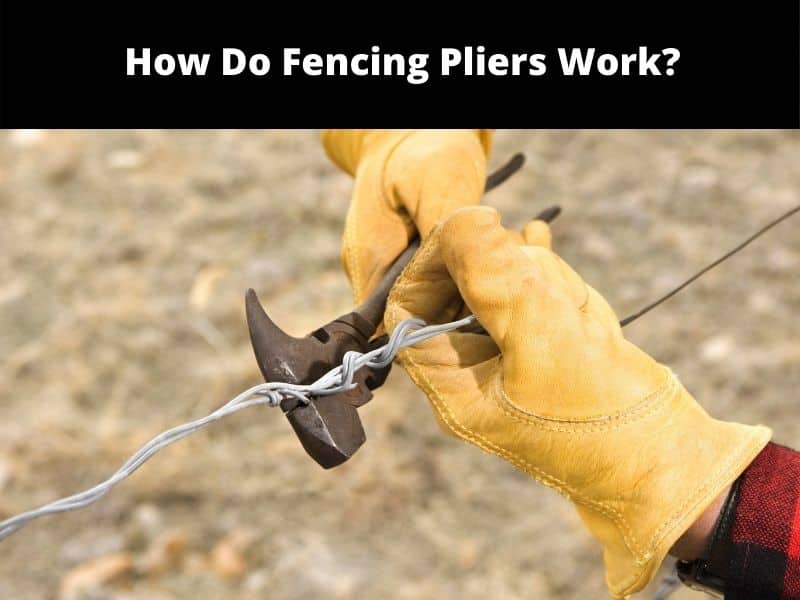 This article will detail what fencing pliers can do and some handy tricks to make the most of their efficiency.

What Are Fencing Pliers?

Fencing pliers are a unique tool, often used to erect fences because of their multifaceted abilities.

Fencing pliers may differ based on the manufacturer, but most sets come with a standard set of features.

A classic pair of fencing pliers will include:

Fencing pliers are ideal for when you need to accomplish multiple tasks within a short time without wanting to carry cumbersome tools with you to perform the same job.

While fencing pliers are popular for post and fence installation, you can use them for almost any fencing job.

Sometimes, you may only need fencing pliers for a specific part of a job, but then you can put them away until later.

The appeal of fencing pliers is that the tool can cut, pull, hammer, twist, stretch, and crimp — all in one compact package perfect for a pants pocket.

When To Use Fencing Pliers

The best part about fencing pliers is that they’re a versatile tool and perfectly capable of holding their own in many different situations, including fencing, garage work, DIY home improvement.

The tool functions well during fencing jobs, but this doesn’t change the fact that they’re a handy tool for when you may need to do jobs quickly without searching for a bunch of different tools.

The primary jobs of fencing pliers are obviously all related to cutting fencing, hammering posts, and so on. But let’s take a closer look at what exactly you can use them for in that realm.

It doesn’t take a genius to see the flat hammer part of a set of fencing pliers and assume you can use them to hammer things.

One of the key parts of fencing is securing the fence, and fencing pliers help do this by driving staples into wooden fence posts.

You can do this by simply placing a fence staple onto a piece of field fence, chicken wire, barbed wire, or cattle panel and hammering the staple until the piece of fence is securely fastened to the post.

To nobody’s surprise, hammers are useful for more than just driving staples. Nails are also popular in fence construction, and those have to be hammered in.

The same side used for driving staples is also used here and works pretty well as long as you have softwood posts.

For hardwood posts, you may need something more heavy-duty, like a dedicated hammer or nail gun.

Regardless, fencing pliers should suffice for most jobs without specialized needs.

A major part of constructing fences involves cutting off sections of the fence, something normally possible with tools like metal snips or wire cutters.

Still, fencing pliers excel in this particular task. Usually sporting three crimped jaws on different sides, fencing pliers allow you to quickly choose how much fence you need for a job and cut it.

Wire stripping is also possible with these jaws.

To cut the fence, fully open the pliers and place the piece you want to cut in either sides’ sharp cutting jaws.

Then, holding the wire, grip and close the pliers firmly until you hear a snap and cut the wire. For stripping purposes, apply less pressure, and pull the wire to strip it as you desire.

Fencing, carpentry, and home improvement situations often deal with staple removal because staples are a popular and quick method to secure materials together.

For these purposes, fencing pliers work wonders. The long and curved claw opposite the hammerhead is easily leveraged to remove even the peskiest staples.

Then, firmly pull the claw in the opposite direction that the staple is going in — stable, firm pressure is key here!

Some staples are particularly stubborn and require more force to remove than others, so just don’t give up!

A less obvious function of fencing pliers is their use in manipulating wire to actually do the job of wrapping wire around fence posts and securing it.

Simply use the plier end of the tool to grip the wire, wrapping it in a circular motion while applying wire ties around the fencing.

Then, twist the grip of the pliers to twist the wire into a continually tightening loop around the post. If you use this method with every fence post, you should have no problems with fence stability.

Tensioning wire and wrapping it is a fairly advanced technique with many uses that become apparent very quickly.

The ability to manipulate wire in this manner is also instrumental when repairing fencing.

After all, a common reason for the improperly secured fence is not wrapping it in the way described above.

Fortunately, with fencing pliers, it’s only a few minutes of work to rescue fencing.

Fencing pliers have many practical functions, but every pair of pliers out there has them. Faced with so many options, how do you choose which brand is right for you? Thankfully, there are a few basic things to keep in mind.

Chrome and tempered steel reduce the chances of rust but at an increased price point. If you’re going to be doing a lot of outside work, it may be worth it to invest in a pair that won’t lock up in a couple of months due to rust.

You want to be able to test out the grip of any fencing pliers you’re looking at.

The primary thing to look for is whether you’re comfortably able to apply intense, firm pressure when opening and closing the jaws.

Pass on the pairs with thin plastic grips and opt for one with a rubberized or nylon grip instead; it’ll be easier on your hands and will last much longer.

If you want to know more about how fencing pliers works and how to use them watch this Youtube video:

Fencing pliers are a great tool for anybody to own, especially if you work outdoors.

With several attachments for performing multiple jobs all at once, these pliers come in handy for anybody building fences, pursuing carpentry, or DIY home improvement.