A power hammer is a very useful tool, most commonly used in forge welding. It has many uses and applications and is well regarded by many as a viable option for welding metal. If you are more familiar with hammers used manually, however, you may be curious as to the function of a power hammer.

Power hammers run on an electric motor, while utility and self-contained hammers run on compressed air. All types of power hammers contain arms and springs, which enable the head of the hammer to place force and motion on the workpiece. 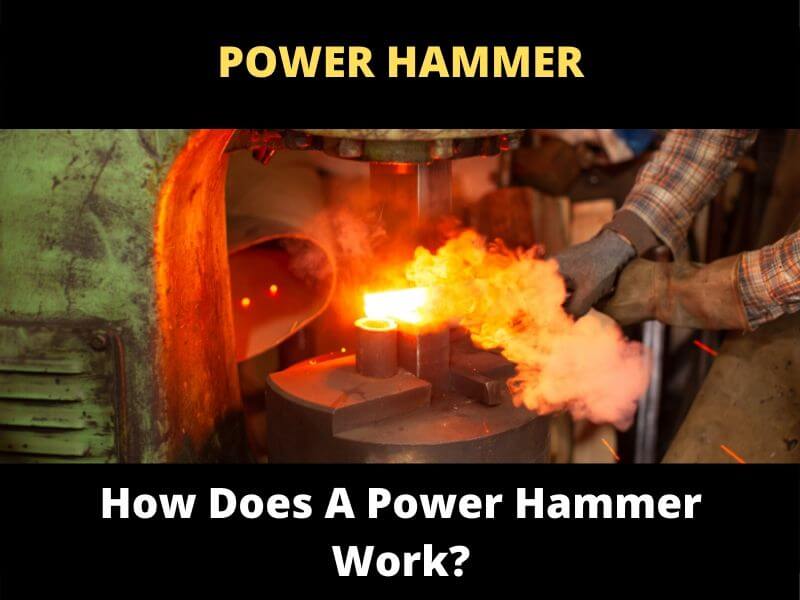 The following information in this article will discuss a few topics related to this question, such as what exactly a power hammer is, it’s function and purpose, as well as how it is used during forge welding.

What Is a Power Hammer?

A power hammer is a mechanical forging hammer that uses non-muscular power as its source of energy.

The most common power hammers are powered through compressed air, though older blacksmith shops may have mechanical or steam-powered hammers.

Power hammers have been in use since the late 1880s, in replacement of their predecessor, the trip hammer.

They are, to this day, most often used by blacksmiths, metalworkers, and manufacturers. Originally, they were powered by steam and later by a motor.

Steam and mechanical power hammers were produced into the mid 20th century, later being replaced by compressed air from the latter half of the 1900s to the present day.

Though steam-powered hammers are rather antiquated, many mechanical power hammers are still in use today.

When looking into the functionality of power hammers and how they’re used, it is also important to review how they are rated in regards to their usage.

How a Power Hammer Is Rated

Power hammers are generally rated by the weight of moving parts that work directly on the piece being worked on.

These parts are as follows:

It’s important to note that specific elements of the design of the hammer are dictated by the power source.

Generally, the output from compressed air vs. an electric/mechanical motor is the most powerful. However, this will vary depending on the manufacturer.

There are a variety of different power hammers, which have different functionalities and purposes.

In order to fully understand the function of a power hammer, it is important to analyze the different types of power sources and purposes of this tool.

Despite compressed air being the most common power hammer found in a modern forge, there are a few different types of power hammers that serve the same or similar purpose.

These different hammer types are as follows:

An advantage of this machine is the amount of vibration it absorbs. Because of how much it absorbs, it requires both less maintenance on the hammer, as well as less of a strain on the person who’s operating the workpiece.

It is important to note that power hammers and specifically self-contained hammers are not ideal for a beginner blacksmith, due to their intricacy and level of force.

If you are considering picking up blacksmithing as a trade or hobby, it is important to familiarize yourself with a manual hammer before learning to use a power hammer.

However, if you are skilled with a manual hammer, then learning how to operate and use a power hammer is a good way to further your skills in forging.

What Is a Power Hammer Used For?

Power hammers are a tool used mainly in the forge welding process. In addition to forging, they are also used for closing rivets and striking steel tools.

Forge welding is the process that joins two pieces of metal by heating them to a high enough temperature to loosen the metal and hammering them together.

This practice is often done manually, which has a process entirely unique to itself. The forging process for power hammers is much simpler, in that you heat the metal, and then place it under the hammerhead of your chosen power hammer.

When used in forge welding, the power source of the hammer raises the hammerhead to prepare for striking the metal and then accelerates it onto the weld.

Though manual hammers such as a ball or cross pein are generally a more popular choice during forging, power hammers are a decent choice if you want a hard and accurate hit from a hammerhead.

The amount of force a power hammer imposes on metal can be compared to the work of two strong men using sledgehammers. – it is very powerful and, due to its weight, has a high level of force upon the piece being welded. Ultimately, it produces an accurate weld and a high-quality metal piece.

A power hammer functions by the power source of the hammer lowering the hammerhead and striking the workpiece. There are many types of power sources for a power hammer, though the main three are mechanical, utility, and self-contained power. All of these processes work with compressed air, which most modern power hammers are produced with.

While power hammers are very useful and forge accurate welds, they are not typically recommended for amateur/beginner blacksmiths.

If you are considering purchasing a power hammer, it’s important to familiarize yourself with forging using manual hammers.

If, however, you are a blacksmith by trade or are reasonably skilled in blacksmithing, gaining skill with a power hammer and familiarizing yourself with its function is a good way to improve your skills in forge welding.