Sandpaper has been around for hundreds of years and has become a standard tool in the average household. But have you ever wondered how it is made?

Sandpaper is made by gluing abrasive minerals such as aluminum oxide, garnet, and silicon oxide onto a paper backing and allowed to dry under some kind of pressure. These materials provide sharp edges for the sandpaper to act as a cutting/smoothing tool. 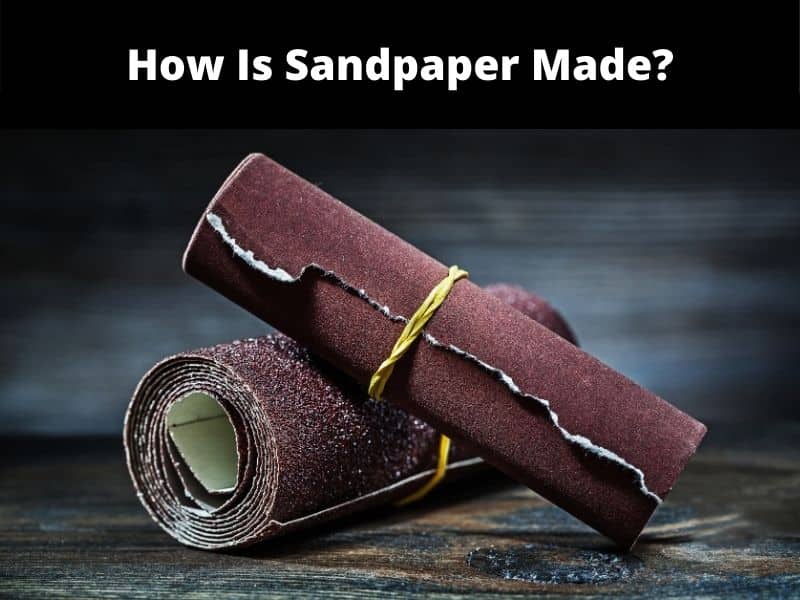 This article will discuss what sandpaper is made of, the types of minerals and garnets used, who invented sandpaper, and what was used before its creation.

Continue reading below to learn more!

What Is Sandpaper Made Of?

Sandpaper is made by gluing abrasive materials like minerals and garnets onto a paper backing. Depending on the type of sandpaper you get, the surface can be covered with open coat abrasives or closed coat abrasives. Each one has different qualities to offer.

Sandpaper with open abrasive surfaces is better for sanding softer materials such as aluminum, cedar, or brass. It typically consists of densely packed grains.

However, a closed abrasive surface is better for sanding harder materials like oak and steel.

There are a variety of different sandpaper types which come with other qualities, backing, abrasives, and bonding agents.

You can determine the specific size of sandpaper you need by checking its grit size which is the number of minerals per square inch.

How To Make Sandpaper at Home

Apart from being inexpensive, making your own sandpaper can be helpful when the situation calls for it.

What Mineral Is in Sandpaper?

Sandpaper is composed of a couple of minerals. Different minerals will give the sandpaper different attributes and effects:

The most common mineral is aluminum oxide, popular for its sturdy nature and a longer lifespan than others.

Aluminum oxide is also the preferred mineral for power-grade sanders.

This type of tough abrasive is perfect for metalworking.

Another mineral commonly found in sandpaper is alumina-zirconia (more commonly known as ceramic).

This mineral is typically blended with other abrasive materials because of the higher expense.

However, the grit is sharp and tough, so it is usually applied to glass or other non-metal surfaces.

You might also find silicon carbide in sandpaper. Sandpaper made of this type of mineral only comes in one grade and is best known for sanding wet or dry surfaces.

However, one problem with this is that the sandpaper will usually wear out quicker.

Finally, minerals containing zirconium alumina and alumina are considered robust and most often used in places like foundries.

At the same time, other minerals such as diamond or cubic boron nitride are harder and are often used for more restricted, special polishing processes.

Why Are Garnets Used in Sandpaper?

Garnets are a group of abrasive and gemstone minerals. They all have similar physical properties but have different chemical compositions.

Their hardness makes them extremely useful for abrasive materials and sandpaper composition.

In fact, their hardness ranks between 6.5 and 7.5 on the Mohs scale, allowing them to create a smoother, softer finish after sanding.

Sandpaper has been around for centuries. The Egyptians used sandstone (which is a naturally bonded abrasive) for creating their pyramids.

However, the first records to indicate sandpaper use go back to the thirteenth century in China. The Chinese used crushed seashells, sand, or seeds, and natural “gums” to bind the material to parchment.

After years of using this method and moving forward in development, new coated abrasives were used.

In 1834, sandpaper was patented for the first time by Isaac Fischer Jr. in Springfield, Vermont.

In the patent, he claimed the invention consisted of coating both sides of paper sheets with a reducing or polishing substance that would be cemented.

By this time, they were using powered steam rollers to effectively produce sandpaper for better quality.

So, although he is not the first to have created sandpaper, Isaac Fischer Jr. is considered the inventor of industrialized sandpaper.

They used waterproof adhesive and backing so that the sandpaper could be used on both wet or dry surfaces. The first time it was used was for an automotive paint refinishing project.

To this day, we still use Fisher and 3M’s designs to create sandpaper.

What Was Used Before Sandpaper Was Invented?

Before sandpaper was invented, workers used various materials to conduct the work.

As we discussed previously, the concept of “sandpaper” had been used well before even remotely being “invented.”

No matter what part of the world people were from, they found different ways to create a natural form of sandpaper to work on their finishes.

Is Sandpaper Made Out of Shark Skin?

Sandpaper can be made out of shark skin. As we mentioned above, native workers in The Union of Comoros used sharkskin to create sandpaper because of the rough scales the skin has.

However, they weren’t the only ones that used it.

Some records indicate shark skin was used as far back as 1540, although it was likely also used earlier.

Carpenters used a specific skin called “hundysfishskyn,” which is a type of dogfish.

In England, such an account from 1540 was discovered, which Louis Francis Salzman notes in his book Building in England Down to 1540. Salzman is a historian that specialized in European industries from the Medieval Ages.

The most common form was from small, tropical “dogfish” sharks. Instead of scales, these sharks had calcified papillae, a rougher, harder surface than scales.

In some cases, there are still products for woodworking that contain Shagreen, but they definitely aren’t common.

Knowing how the sandpaper is made and the history of how sandpaper was invented is helpful. Not only does it show you the progression of sandpaper today, but it also brings us back to the roots.

In general, sandpaper is inexpensive and readily available, but making your own is as easy as gluing sand to a piece of thick paper.