As simple as the tape measure might look, it is not surprising that many do not know how to read it. There is more to reading the tape measure than marking out a few lines. To make things easier, I have put together an all-in-one guide that takes you through what a tape measure is, its features, and how they play a part in inaccurate readings.

Here’s how to read a tape measure: 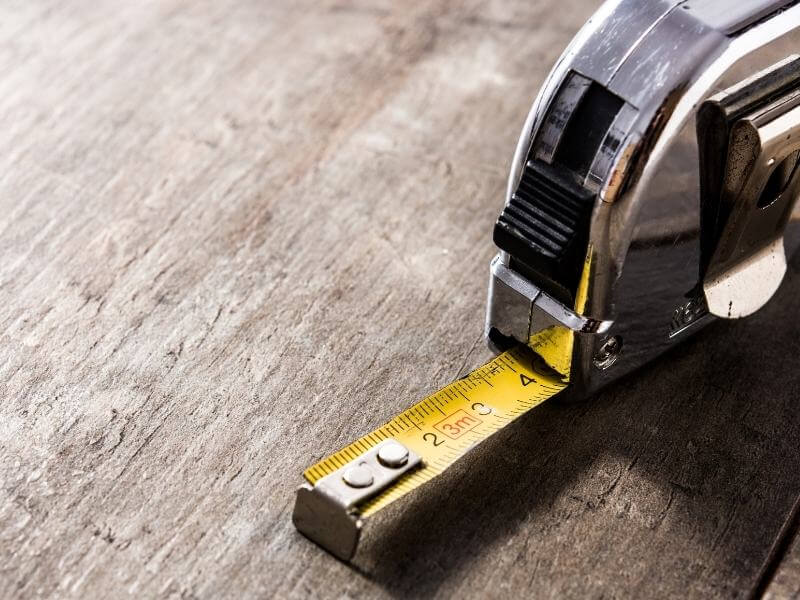 There are technicalities to reading a tape measure primarily since the metrics used vary from certain places to others. If you would like a more thorough guide on the basic steps listed above, as well as some advanced tape measurement techniques to help you further understand the tape measure, then keep reading!

The tape measure is an extended version of table rulers used for drawings and rulings. It comes with the same design but just a few different technicalities. It can also perform more measurements and confirm assumptions than the table ruler.

Just as it is a notch higher in versatility than the table ruler, the tape measure also has its share of technicalities compared to the table ruler. They also come in different types and have different purposes.

Here are the common forms tape measures can take:

This type is prevalently used for construction and comes in longer than conventional flexible tape.

It also comes in a roll-up design that allows you to stretch to the required size and fold back in after use and can stiffen up when taking lengthy measurements.

Because it is stiff, it can be held in a straighter line, which is crucial when something needs to be very straight.

They can be made from various materials, including fiberglass and metal.

Even though they can be obtained from different material types, measuring tapes still utilise the same systems to take readings.

A flexible or ribbon tape is used by tailors to take measurements for the purpose of sewing or altering clothing for customers.

It is also used by dieticians or nutritionists when tracking clients’ weight loss progress.

It can also be used for home improvement projects where a stiff tape measure is too rigid to take accurate measurements.

However, specific, more advanced versions of tape measures include details and measurements specific to a particular task.

For example, a tape measure can feature stud intervals for constructions.

Reading the tape measure is easy once you understand the measurement systems, the featured markings, and how they apply to the real world.

Now that we know what the tape measure is and what it is used for, let’s get into the intricate details that make it measure what it is.

Read Also: Types of Hand Tools with Names and Pictures

A standard tape measure features two measurement indicators.  The first is the metric system, and the second is the imperial unit system.

The imperial system takes precedence over the metric system in certain parts of the world and for specific tasks and professions.

The Imperial System On a Tape Measure

There are a few ways to spot and differentiate the imperial unit system of measurement from the metric system on a tape measure.

The tape measure indicates on each side which is for which.

The two measurement systems are done on the exact flip of tape. At the start of the tape, where the 0-1 mark extends, it is written there to indicate which side represents which system.

The spaces are bigger as well. When you look at both measurement systems of the tape measure, you’ll notice that the number 1 is a lot larger than the other side.

The space between inch numberings is larger than the areas between centimeter numberings. An inch can cover two and a half centimeters and is mainly used for taking height-related measurements.

How To Read An Imperial Tape Measure?

If you are used to the metric system of measurement, then the imperial system might seem a bit tricky at first.

However, once you get the hang of it, you find it is not very different.

The imperial tape measurement system features specific indicators that determine the result of every reading.

These three serve as the primary measurement indicators when using the imperial measurement system.

The long lines represent whole inches. These lines are the ones that appear the longest on the tape and are repeated from the tip of the tape till the end.

When taking measurements with the inch-system, after stretching out your tape, if it ends at a long line, the number right next to the long bar represents its measurement.

So, if it stops at nine, then you have a nine-inch-long reading on your hands.

The short marks between the long lines represent different fractions of an inch. Even these shorter marks come in different sizes.

The short mark that falls at the center of inches is not as long as the long line but longer than the lines right next to it on both sides.

This slightly longer short mark represents the half inch.

At every 12” (30.48 cm), the number is written in red to represent an important measurement.

This red denotes that one foot has been measured for the imperial system. This aids accurate measurements as 1’ (0.3 meters) equal 12” (30.48 cm).

The metric system of measurement comes in centimeters and millimeters.

There are a few ways to spot and differentiate the metric system of measurement from the imperial system on a tape measure.

The tape measure indicates on each side which is for which.

Since the two measurement systems are done side-by-side on the exact flip of tape, it might be challenging to differentiate them.

It will cause inaccurate readings if the imperial system is used where a metric measurement system is required.

Fortunately, the manufacturer has made it a feature on the tape measure.

At the start of the tape, where the 0-1 mark extends, it is written there to indicate which side represents which system.

The metric system carries the “cm” indication, which stands for centimeter.

The numbers are much smaller than the imperial measurement system on the centimeter side of the tape.

The spaces are smaller, and when you look at both measurement systems of the tape measure, one is on the smaller side.

The numbers and lines look more scrunched together and tighter than the imperial measurement system.

The space between cm numberings is smaller than the spaces between numberings.

How To Read A Metric Tape Measure?

Tape measures created with the metric system come in centimeter and millimeter measurements, unlike the imperial system that comes in inches and feet. Although they both have one similarity.

They are both clearly stated on the tape measure, designated with lengthy lines for whole measurements and short lines for fractions.

Each centimeter on the tape measure is made up of a total of 10 millimeters (0.39 inches).

This means with every one-centimeter distance covered, there has been a total of ten millimeters in-between.

These are shown with lines that come in different sizes, some longer than the other but not as long as the lines of whole centimeters.

Not all of these lines are numbered. While numbering saves time in calculating the fractions, each line with its numberings can cause confusion, especially since the metric tape measure system is more compact than the imperial system.

It is usually written in a larger font or a different color, often designated with red or green.

You can either read the metric system in millimeters or centimeters. When reading in millimeters, you count the lines until the point you want the measurement taken. This means that each line matters in the millimeter measurement.

However, if you take the measurements in centimeters, the more extended lines on that scale matter. The most extended lines are accompanied by numbers written in larger fonts in most tape measures.

In some cases, they could even come in another color. These lines represent each centimeter, taken after ten lines of varying sizes have been counted, denoting 10 millimeters (0.39 inch).

For example, the first mark after the “1 cm” point mark indicates 11 millimeters (0.43 inches). The next would be 12 and the one right after 13mm (0.51 inch). The fifth mark is always longer than the others but not as long as the whole number mark represents centimeters.

In the table below you can see the different length measurements for the metric system:

No matter what form your tape measure comes in or what design it is made, a hook usually accompanies it at the start or tip of the tape.

When taking measurements, this hook is of high importance.

Not only does it let you know that it is the tip of the tape, but it is also vital to take accurate measurements. All measurements start from that tip and not from the line after it. So, from the start of the hook is where the sizes start.

What Are The Different Parts of A Tape Measure?

A classic tape measure  is made of different metal or plastic parts. This pieces include:

Before taking accurate measurements with a tape measure, it is vital that you first understand what makes precise measurements and how to avoid errors.

When using the tape measure, ensure to take all safety precautions.

Though a simple enough tool, the tape measure can prove slightly dangerous, incredibly the high tech or retractable ones.

A retractable tape coming in full speed would cause a lot more harm to you and those around you.

The edges of the tape can also cause cuts and bruises. Asides from that, you are well on your way to expertly utilizing a tape measure.