When you’re working on a project, the last thing you want to happen is your jigsaw not cutting a piece of material straight and potentially costing you time and money. Unfortunately, there are a variety of reasons that a jigsaw might not cut straight. What are some of these reasons?

Your jigsaw may not be cutting straight because it’s outdated, lacking guide bearings necessary for straight cuts. Components such as blade clamps and guide bearings can also get damaged or worn. It’s also possible that human error is to blame, and you need a better straight edge or technique. 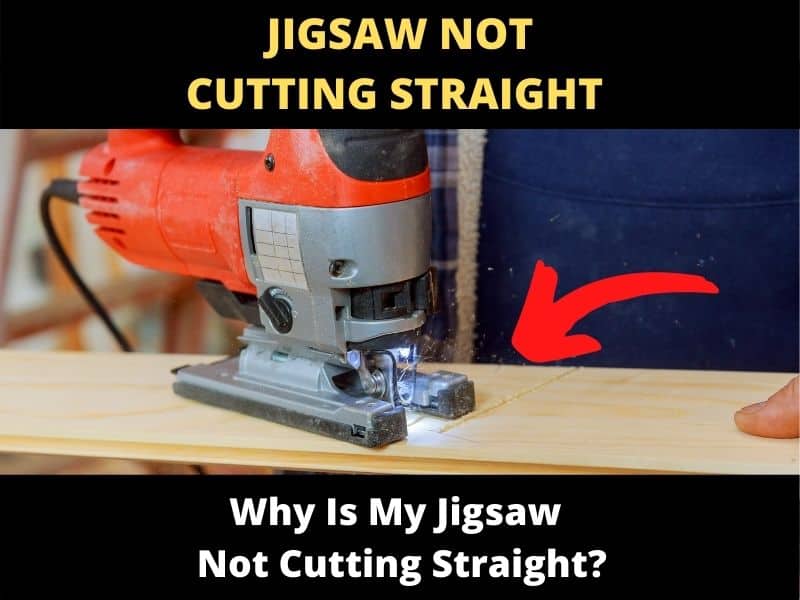 This article will go into more depth about the various reasons that can cause a jigsaw not to cut straight and how you can fix the issue so you can get back to the workshop.

Using a jigsaw without a guide bearing will provide a very poor impression of what the tool is capable of when used as intended – with the modern models.

Guide bearings are a second support point for jigsaws that almost completely stop blade movement. This is why old jigsaws tend to veer in the middle of cuts and cause frustration.

2. Putting Too Much Pressure on the Blade

If used properly, a jigsaw will cut straight and curved as necessary. However, if you put too much pressure on the blade when you’re cutting, it can force the blade to bend, thereby causing curved cuts.

Another factor is how you’re using your cutting edge, which is covered in detail in a later section.

Let the blade do the cutting when working, and apply less force. You’ll find that going along with the saw is easier than forcing it.

Use downward pressure and press against the guide, so you’ll be more likely to have a straight cut.

Keep in mind that the slightest amount of lateral (sideways) pressure can cause the blade to veer off of your edge and mess up the whole cut.

With jigsaws, it can be tougher to make perfectly straight cuts than with, say, a circular saw or even a hand saw.

This is because jigsaws aren’t really designed with straight cuts in mind, even though they’re technically possible.

When a jigsaw stops cutting straight, it’s most likely due to damaged or faulty components within the saw, assuming you have a modern jigsaw.

A variety of components could be your issue here, and we’ll be going into all of the possible culprits.

When the guide or control bearing breaks or gets damaged, it will stop providing support to the blade and cause cuts to swerve.

Thankfully, it’s rather simple to remove a bad bearing. Simply remove the shaft from the saw and put in the new bearing, and replace the O-ring on it.

If your jigsaw won’t cut straight and you can’t identify any problems, it’s possible that the guide bearing is worn—an imperceptibly small groove can have a big impact on the performance of your jigsaw.

Even if you don’t think anything’s wrong with the bearing, try replacing it anyway just to make sure.

Best case scenario, it fixes your problem! And hey, it’s never a bad idea to update your tools’ parts.

If the blade clamp is damaged or faulty on your jigsaw, your blade won’t be supported and won’t absorb the shock of cutting, making the cut curve.

Check your blade clamp periodically to make sure it isn’t loose. This is usually due to screws stripping out or becoming loose as a result of vibrations from regular operation.

If a blade clamp gets too loose, it won’t tighten around a blade when inserted, causing the blade to be loose or even fall out altogether.

As with many things in life, you get what you pay for with jigsaw blades. If you’re using cheap blades from Walmart or the cheapest blades at the local home improvement store, you’re probably using poor-quality blades.

It can be tempting to think cheap blades will cut just as well as premium blades, but that isn’t the case.

When in doubt, ask a knowledgeable mentor or home improvement professional.

Cheap blades are typically made with weaker alloys compared to good blades in order to cut costs.

If you need help locating blades, check your local home improvement store and compare the blades available. Cheap blades will almost always be noticeably thinner than the pricier ones.

Another factor to keep in mind when buying blades is the teeth count. A blade that has between 6 to 9 teeth is good for fast, general cuts in wood but won’t make precise or good-looking cuts like a saw with a higher teeth count.

Twelve or more teeth is what you really want for precision cuts, but keep in mind that they cut through wood more slowly because they’re designed to cut metal.

Better blades may cost more upfront, but in the long run, they will save you time, money, and frustration.

This isn’t what you probably want to hear, but sometimes jigsaws aren’t the end-all-be-all saw for every job.

Technically, jigsaws are designed for cutting curves, and this shows in the way cuts tend to bend with even the best blades.

If your jigsaw just isn’t cutting straight no matter how well you take care of it, it may be time to think about using another saw.

By all means, keep your jigsaw around—it’s a great tool, but for an admittedly niche specialty. If you take the time to understand the saw’s peculiarities, it can be made to make perfectly straight cuts, but most people don’t have the time.

If you’re experiencing too much frustration, just use a different saw. You may find that your results match up better with a saw that’s actually designed for straight cuts, rather than a jigsaw that you have to be very careful with to cut straight.

It can be easy to come out with a crooked cut and blame the saw, but have you considered whether it’s something else?

You should ideally use a plastic or metal straight edge, something designed to be used as a cutting edge.

Perhaps that piece of wood you’ve been using as a cutting edge isn’t as straight as you think it is.

Rulers and levels are other good choices to use for straight cuts.

Make sure you clamp whatever you’re using as an edge. If your cutting edge isn’t clamped strongly enough, pressing against it as you make a cut can make the edge skew, throwing your cut off.

As mentioned above, even with a perfectly clamped straight edge, any kind of lateral pressure can ruin a cut.

Make sure to cut against your edge and guide bearing to ensure a perfectly straight cut.

It can be frustrating when your Jigsaw won’t cut straight, but you have options at your disposal to help fix the problem: