Depending on your project needs and your budget, you may struggle to afford or even use a miter saw and a chop saw. Some industrial chop saws are over $10,000, with the average pricing for home tools being around $500 alone. Since tools are expensive, some people look to use what they already own. So, you might be wondering if you can use a miter saw in the place of a chop saw.

Miter saws and chop saws are not the same, even if the descriptions may sound similar. A chop saw is used for straight precision cuts, and a miter saw is used for angled cuts. Though it’s tempting to try to adjust the miter saw to work as a chop saw, the results will not be as good. 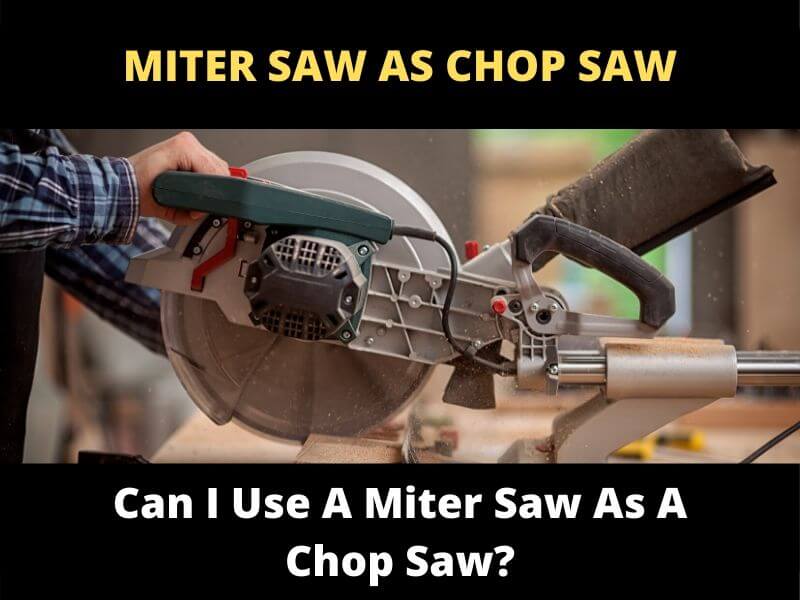 This article will explain what you can use a miter saw and chop saw for, while also establishing the differences between them. Depending on your situation, you may only need one saw or the other; you can choose to save a ton of money and time researching products by knowing what the best product for your purpose is.

What is a Miter Saw?

Miter saws, or particularly power miter saws, are designed to make angled cuts. These cuts are then used to better mold or trim what you are going to need cut.

Most of the applications of a miter saw are general carpentry, especially for beginners. This saw can also make straight crosscuts and can serve as an extremely versatile tool.

A miter saw can perform one of two cuts: either a general angled cut or a bevel.

A compound miter, for example, can do a bevel and miter cut. This type of miter saw does this through its inner-adjustment system, swaying the blades in a left-right direction.

Further, the blade can be tilted so that it cuts at an angle. Other types of miter saws have a sliding arm, which allows the blade to extend even further than its original capacity.

This allows the ability to cut boards at a wider angle.

What is a Chop Saw?

When working in either the carpeting industry or hobbyist building within your own home, chop saws are known to work well, especially for beginners.

Unlike the miter, the chop saw is known more for cuts that are straight and precise. For example, Many contractors use chop saws to make square cuts.

There are two main types of chop saws: the metal chop saw and the woodchop saw.

In general, the process is to line up the metal sheet or item you want to work on with the blade and do a dry run simulation.

This would virtually guarantee beforehand you know the necessary motion to make the cut you desire on the spot you need it for.

Then, turn on the blade and let it do the work for you. Always remember not to force anything as this entire process’s safety depends on the blade doing the work.

The Differences Between Miter Saws and Chop Saws

Although it is often assumed that the miter is the same as the chop and vice-versa, they are very different in multiple aspects. There is one similarity that often fuels this confusion: they both use a circular blade with a vertical motion to cut. They look almost the same from the exterior.

However, chop saws are more industrial-grade, and thus much more powerful compared to the miter. Therefore, when doing a simple DIY project, opt for the miter rather than the chop.

For a miter saw to be used in-house, a 10- or 12-inch should work well. The miter is also more capable of having neat trims and finished cuts.

For example, they can be used successfully on trim, molding, or door frames. In general, if you are a beginner, the miter would work well for you.

Noticeable differences between miter saws and chop saws include the following:

The majority of chop saws available will be the standard and minimum 14-inch requirement.

However, some will be massive, especially if they are meant to be used in an industrial job.

Gasoline-powered chop saws can be used mobile, and they are gigantic angle-grinders that can only be used if extreme caution is taken.

Both miter saws and chop saws are great tools in their own right, but your needs and preferences will determine which one you need for your workshop – or if you need both.

At first glance, a miter saw and a chop saw may seem like the same thing – they both have a circular blade that uses a circular motion to cut.

For this reason, it’s understandable why most people would think they can use a miter saw as a chop saw.

However, as you’ve seen in this comprehensive guide, they are quite different.

Chop saws are built to cut through most metals and stone, while the miter saw is an excellent choice for wood projects.

Therefore, the choice between a chop saw and miter saw will depend on the project at hand.

I hope this article was helpful. Good luck with your woodworking projects.