Designing or redesigning your kitchen is exciting, but no matter which way you go, knowing where to place your kitchen stove is essential. After all, that’s where you’ll be cooking your meals. So it’s good to ensure that you’ll be comfortable standing there and that the rest of the kitchen is protected against the heat and fire from the stove.

You should put the kitchen stove in the island if you have the space. Having your stove in the island has many advantages, including giving you the ability to complete several cooking tasks in one spot and allowing you to be more present in the room around family or friends. 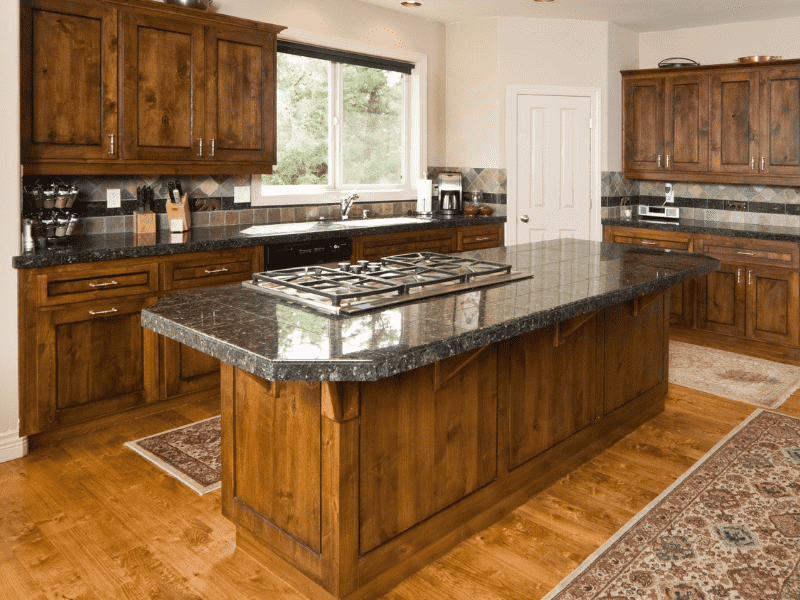 The rest of this article will discuss why putting a stove in the kitchen island is a good idea and what factors you should consider when deciding on the placement of your stove.

Benefits of Putting the Stove in the Island

Putting your stove in the kitchen island has become more and more popular for a variety of reasons.

While some of your decision-making regarding your stove placement will always depend on your personal preference, there is a reason that stoves in kitchen islands are increasingly becoming the way to go.

1. You’re More Present in the Room

One of the biggest draws to having your stove in your kitchen island is being able to look up and see the room while you’re cooking.

Traditionally, a kitchen stove is along the wall.

This means that when you’re cooking, your back will be facing the rest of the room.

While there’s nothing wrong with this, it can get frustrating for some.

Being more present in the room is especially great when you have groups of people over for a party, or even when you have children or other family members living with you.

A stove in your kitchen island makes it easy for you to watch your children while cooking and allows you to have a conversation with other people in the room.

When your stove is in your kitchen island, you can easily work on the stove while using the countertops right next to you.

Though traditional kitchen setups also have counter space next to the stove, it isn’t as much as what the island offers.

So, if you’re someone who likes to cook complex meals, a stove in your kitchen island makes things much easier.

Furthermore, you’ll be able to do everything you need to on the kitchen island, freeing up the rest of the counter space in your kitchen for other uses, such as placing food and utensils.

This makes it easier when you’re cooking with someone else – they have space to work, without feeling like you’re taking over all the counters in the kitchen.

The worst feeling in the world while cooking is feeling like you don’t have enough room.

Putting your stove in the kitchen island not only allows for more room to cook but opens up the kitchen overall.

Although simply moving the stove to the kitchen island doesn’t physically make the room bigger, having a different layout and point-of-view while cooking will make the space feel bigger and less cramped.

What To Consider Before Putting a Stove in an Island 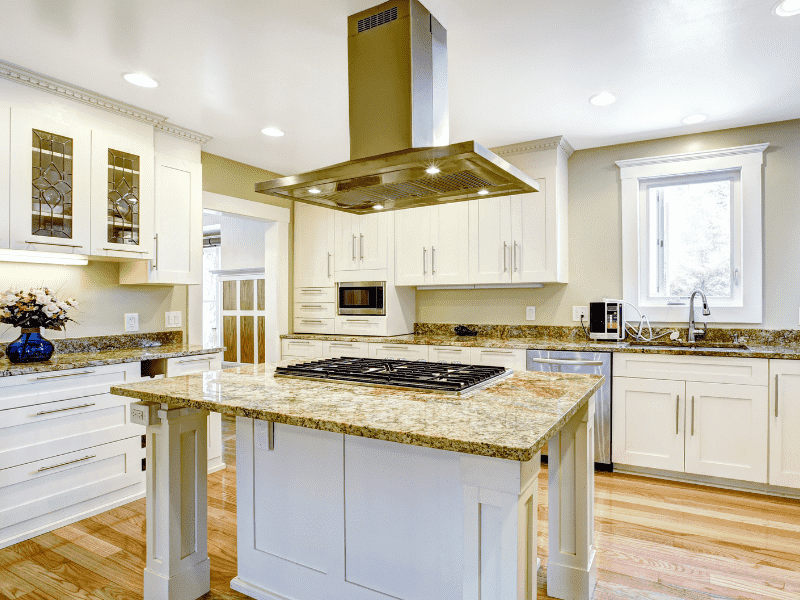 While having the stove in the kitchen island is great, there are a number of factors to consider before deciding whether this placement is right for you.

This is especially true if you’re renovating an existing kitchen, rather than building a new one from scratch.

Let’s take a look at these factors:

Because of this, many people use kitchen hoods (or range hoods) to catch all of the smoke while cooking.

A range hood is typically located directly above the stove.

This means that if you place your stove on your island, a kitchen hood will still be necessary above it.

So, it’ll have to hang in the middle of the island instead of hiding away against a wall, which may not be attractive for everyone.

Furthermore, you’ll have to check to see whether it is possible to install a kitchen hood over your island based on your existing ventilation system.

The two most commonly used types of stoves in the United States are gas stoves and electric stoves. However, no matter which of these you choose, they’ll need to be installed on your kitchen island.

The work involved is about the same, as they require either an electric or a gas line.

This shouldn’t be an issue if you’re building a home from scratch.

However, if you’re renovating and want to move your stove to the island, you’ll need to see if the stove lines can be connected first.

If they cannot, you’ll have to adjust your plans based on the reach of the lines.

Lastly, consider where your sink will be before deciding on the stove.

Many people put their sinks in the kitchen island rather than the stove because it offers a clean and sleek-looking aesthetic.

That said, having both a sink and a stove in the kitchen island can be too cramped.

So, if you have a sink in your island, you’ll need to decide whether shifting your stove there will be worth it.

If you’re building a new home, you’ll need to consider which you’d rather have in the island.

If you’re thinking about putting the stove in the kitchen island in your home, you definitely can.

There are many advantages to having your stove in the island, including being able to converse with family members or guests easier, having the ability to multitask while cooking, and feeling less cramped.

Despite all of these advantages, you should always consider the ventilation situation, the type of stove you want, and the placement of the sink before deciding to put your stove in the kitchen island.