If you’re into wood or metal works, you’re likely familiar with drilling. You’ve probably used different drills like the hand drill, hammer drill, and even the impact driver. But what about a VSR drill?

A variable speed reverse (VSR) drill is a versatile, powerful, and fast machine used for drilling holes in various materials like wood, metal, stone, and more. It’s perfect for those who need to do a lot of drilling because it can handle different materials, operating both forward and reverse. 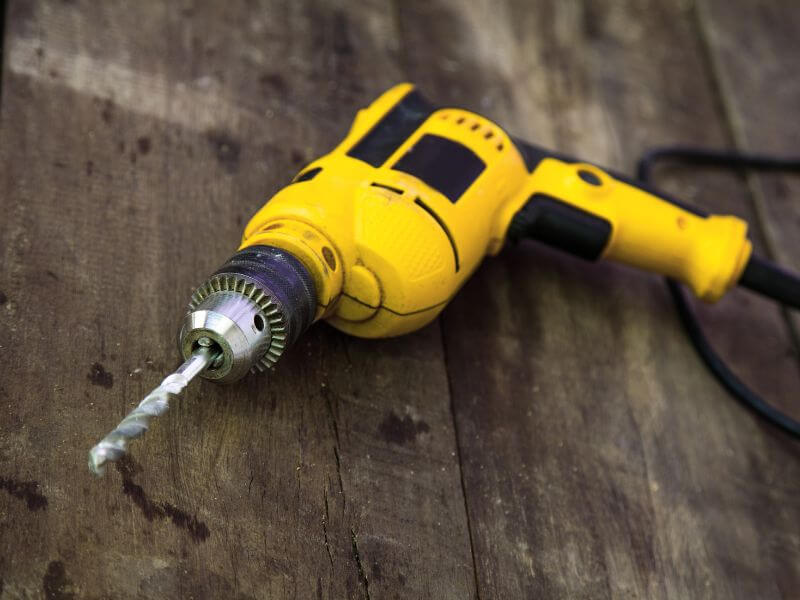 In the rest of this article, I’ll discuss how a VSR drill works, its functions, and its benefits. By the end of the article, you’ll know if a VSR drill meets your drilling needs. Stay tuned!

The Workings of a VSR Drill

A VSR drill works like a power drill. It has a variable speed trigger used to adjust the speed of the drill bit.

The higher the speed, the faster the drill bit will rotate.

The big difference between a VSR drill and other drills is that it can operate in both forward and reverse directions.

That means you can use it to loosen or tighten screws, depending on which direction you set the switch to move.

The Functions of VSR Drills

See a VSR drill in action:

I’ll go over these functions in more detail in the sections below.

The VSR drill has a chuck that holds the drill bit in place. As the trigger is pulled, the drill bit rotates and creates a hole in the material.

A VSR drill can work with self-drilling screws, which are screws that have a tip that drills their own hole as they’re being driven.

This type of screw is often used in metal because it can create its own pilot hole, which makes the job easier and faster.

Therefore, instead of drilling a hole first and using a screwdriver to drive the screw into the surface, a VSR drill shortens your work – ensuring you can accomplish the two tasks at once.

The other function of a VSR drill is driving, which is when you use the drill to drive in or remove screws, nails, and other fasteners.

This is done by attaching a driver bit to the drill.

A driver bit is a type of screwdriver bit that’s used with power drills.

It has a hexagonal shaft that fits into the drill’s chuck and can be tightened with a wrench.

There are two types of driver bits:

Most woodworkers are faced with the challenge of backing out screws after installation.

In most cases, you may realize that the screw is installed at the wrong location and needs to be removed.

So, how do you achieve that?

The reversible nature of a VSR drill comes in handy when you want to back out a screw.

You simply need to set the switch to reverse and use the drill to remove the screw.

This function is also useful when you want to loosen a stuck screw or bolt.

You can use the VSR drill to apply extra torque until the screw comes loose.

There are different types of drills on the market today, each with its benefits.

If you work in metal or wood stores, you understand that drilling involves creating holes, driving screws in the holes, sanding, and removing installed screws.

Most regular drills can only drill holes in surfaces.

A VSR drill is versatile because it can do all these tasks and more.

You don’t need to buy different power tools to accomplish each task. One VSR drill is enough, saving you money in the long run.

VSR drills are also powerful enough to handle most projects.

They have high torque, which is the twisting force needed to drive in screws or loosen them.

You can adjust the torque of a VSR drill according to the project you’re working on.

3. VSR Drills Are Safe and Easy To Use

The United States Department of Labor reports a case where an employee’s thumb was amputated after a drill injury.

Such accidents demonstrate how risky working with drills can be.

VSR drills have safety features that prevent them from being turned on accidentally.

For instance, you must pull the trigger before turning on the drill, reducing the risk of injuries.

Additionally, VSR drills are easy to use because they’re lightweight and have a comfortable grip.

Thus, you can work with them for long periods without feeling fatigued.

A VSR drill is an excellent tool that makes drilling and driving easier.

It’s versatile, powerful, and easy to use, which makes it a valuable addition to any woodworker’s toolkit.

It can also be your go-to tool if you have multiple home improvement projects to handle.