Anvils are perhaps the most useful tool in blacksmithing. They allow you to hold and shape your projects to look and feel as they should. That being said, you should know the key attributes to keep an eye out for before you purchase your first one.

A good anvil should be strong and durable, long-lasting, heavy, and the perfect size for all of the tools that you’ll be working with. It should be seemingly impossible to move by the force of a swinging hammer, and you shouldn’t notice any dents or chips over time. 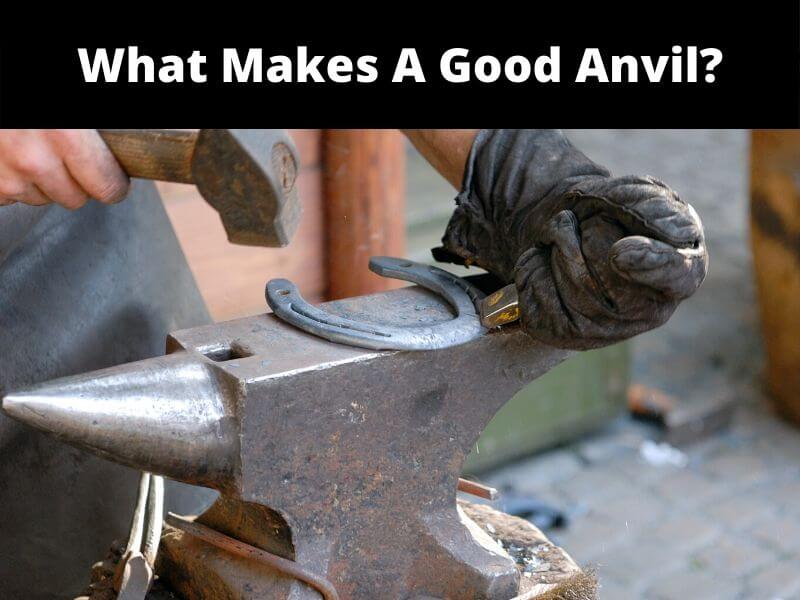 What to Look For in a Good Anvil?

Anvils have been part of blacksmithing and other jobs for centuries. With so many years of expertise, you’d be able to understand how many hobbyists and workers have got it down to a science, including the design of an anvil.

If you’re new to blacksmithing or you simply want to upgrade your current setup, you’re in the right place.

Here are the five features that you’ll always find in a good anvil:

Features of a Bad Anvil

Unfortunately, you’ll notice that far too many beginners become prey to weakened, unfit anvils. Whether they’re purchasing a used model from someone who’s had it for decades or they don’t know what to look for in a new one, many anvils can give false hope.

The good news is that you’ll learn everything that you need to know about the features of a bad anvil once you read the signs below.

How Long Does a Top-Notch Anvil Last?

Anvils are made to last for countless years, but it all depends on three factors:

Typically speaking, you’ll find that most heavy-duty old school anvils last over 100 years, sometimes even more. If it’s made from hardened, tempered steel as mentioned in the section above, then you’ll get the most use out of it.

On the other hand, modern cast iron anvils can sometimes last less than five to ten years. The reason is partly because of misuse and also because cast iron isn’t strong enough to take the blunt force of a missed hammer strike.

If you want to get the most use and the longest life out of your anvil, then a proper technique is definitely going to be required. You shouldn’t ever intentionally strike your anvil unless you’re trying to shape it for one reason or another. Even in that case, a good anvil won’t budge.

Another thing to keep in mind is that consistent use of an anvil is actually much better than neglecting it. When you let an anvil sit outside without using it for several years, it’ll develop a layer of rust that eats away at the surface.

Proper storage is just as important as good technique. Rather than allowing rust to develop, try using some cosmoline to keep it protected from the elements.

It won’t combust from striking as many oils would, and the coat lasts just as long. Do your best to store an anvil under a covering or indoors when it’s not being used to prevent moisture from settling.

As you can see, finding a good anvil isn’t as hard as it seems. You just need to make sure that it’s tough enough to be suitable for your projects. Not all anvils are created the same, so it’s important to keep an eye out for the features found throughout this article.

I hope this article has been of help to you. Thanks for reading and good luck with your future blacksmithing projects!